This outfit is my foray into the world of the late teens and early 20’s.  I used two patterns from Past Patterns, dated to circa 1920, for both my blouse and skirt, while my purse was made from a tapestry remnant and Vogue #7252, from the year 2000.  My hat is a thrift store find which I decorated to make-do and my shoes are close reproductions from Jeffrey Campbell.  I used primarily cotton for all pieces – even thread!  There are so many fine details to this set – the blouse has my hand-stitched floral designs on the neck, shoulders, and sleeves while I used old original glass teens/20’s era buttons for the front closure of the blouse.  There are real brass buttons along the pocket panel of the skirt…and check out those awesomely enormous pockets as big as mini suitcases!  My background was one of the very first “arcade” indoor shopping malls in our country, a lovely Gothic place built in 1919.  To see and read more, please visit my blog post here.

Terminology help: What do you call this kind of pocket?

This is a little thing but it’s been nagging me forever.

I’ve gotten in the habit of thinking of them as “Colonial pockets” because they’re similar to the pockets women wore as a separate accessory before pockets installed in clothing became common, but I know that that’s only my lazy term for them and they must have a proper name.  Unfortunately, since I don’t know what that name is, I can’t search for it, and since they’re not a terribly common kind of pocket they’re not coming up on my various “types of pockets” searches.

About a week ago I had this crazy idea. What if I made another half-circle skirt, but I made it fully reversible? Little did I know that it wouldn’t be as easy as I first thought when it popped into my head, but I made it work, and I think its pretty fab! I ended up having to use a separating zipper made for a coat, which was a challenge finding one the right color and length, but after that it was pretty smooth sailing!

The lighter fabric is not white- its actually a very pale pink with a tiny and delicate floral vines pattern all over it. The darker one, which I’m pretty sure you can see, its just pink scallops. I drafted the pattern myself, using the measurements kicked out by this awesome circle skirt calculator. My inspiration for this skirt is the one pictured here in this post from a week or two ago.

I was able to use up two fabrics I had a ton of in my stash that I had no idea what to do with (I originally intended a summer top but it never happened and I had accidentally ordered double the yardage I needed). I also made a matching (also fully reversible) purse to go with it. The purse is my own pattern design- its not vintage or even vintage inspired, but it goes with the skirt that is! LOL

I also made the button down shirt I am wearing in both photos a few weeks ago out of some other fabric I didn’t know what to do with. I’m really trying to pare down my stash this summer, both of fabrics and patterns, and have a lot of patterns listed for sale in my shop, mostly vintage.

You can see more about this fabulous skirt on my blog here.

From jacket with a past to bag with a future

Hi, I have been lurking here a while and this is my first post. I have become interested in sewing from vintage patterns after a couple decades of not sewing very much. Inspired by all the talent I’ve seen on We Sew Retro, I recently took a short dressmaking class.

Since I haven’t made much progress on my class project (a dress from a 1970s pattern), I wanted to tackle something quick and easy to feel a sense of accomplishment. I made a bag using Simplicity pattern 9553 from 1971 and fabric from a well-worn jacket made in India in the late 1960s/early 1970s.

Made of hand-block printed and hand-loomed cotton, the jacket was originally sold at the upscale department store Bergdorf Goodman in New York. I bought it at a local thrift shop.

I made a few changes to the pattern and now this is my dream bag — the perfect size, shape, and color.

Although I know this period is later than what I mostly see on this site and my project was very basic, I thought readers who appreciate vintage clothes might enjoy the story of how my bag led me to meet the grand-daughter of the jacket’s original owner. Read more on my blog, Joyatri.

I was so inspired by Handmade Jane‘s super awesome pants that I wanted to make something in a blue knit and sailor-y. So, I brought out good old Simplicity 1924 from 1947.

I have never made this one before and was worried it would look like a paper bag on me. There were only 4 main pieces and I made it out of thrifted grey and navy striped cotton t-shirt knit (top) and navy blue poly-something knit (bottom). I have never sewn knits before but always wanted to and thought this was the perfect time.

The only downfall with using the knit was that the gathers are not very apparent. I did find it difficult to match the stripes too. Somehow the stripes were off on the fabric itself  b/c they just wouldn’t even line up before I cut the top. I really need more practice sewing knits (I didn’t have the right needle and I have no idea how to finish the seams), but for a first attempt this turned out wearable and cute. I did French seams on part of the dress and they really didn’t work. It is almost like they are too heavy or something, they didn’t lay like I wanted them to. The front just sags inward at the seam. Next time I’ll eliminate the seam and cut both the back and from on the fold. Any advice? I also could not figure out the back neck facing. I initially thought the facing was not needed, I did the top and realized it wasn’t really a facing but a piece that oddly finishes the back neck (these old patterns…. sigh). Then I proceeded to sew it in wrong no less than four (!!!) times. The ‘instructional’ picture was horrible and I swear that it just can’t be done the way they want. 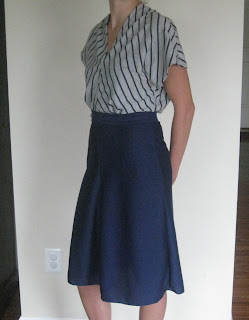 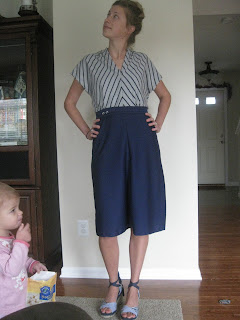 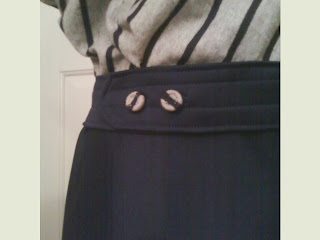 I couldn’t get a good picture… I just wasn’t feeling it and I couldn’t keep the Little Lady out of it, it was a very loooong day. I may try again later after some makeup and a hairbrush…

The very best part about this dress what that once I had everything assembled I took a good long look at it and thought, “I don’t need a zipper!”. It’s totally pullover!. I sewed up the side, added a belt and loved it! It’s my new go to pattern for a completely comfy yet vintage classic outfit. It took me approximately 5ish hours to complete; it’s hard to say b/c I stop and start so much with the kids.. I will most assuredly make it again in a knit (try try again). The bottom blue knit was a bit too thin, and very hard to hem. Advice please! I used a rolled hem foot and it was okay. It only got chewed up once and I fixed it pretty well. I’ll probably use a bottom weight knit or another t-shirt knit next time.

3 Comments
Contributor Login
Search the Site
Important Legal Stuff
Posts on this blog may contain affiliate links, which means if we enjoy a product and recommend it to you, and you decide we're pretty smart and go buy it, we get a few virtual pennies dropped into our "Cappuccino and a copy of Threads Magazine" coffee break fund.
You Might Like