I just finished up this little wrap top from a pattern from 1946.  I used Simplicity 1867, a vintage pattern, and used view 5.

I just barely got this pattern cut out from my fabrics- it was meant to be from one fabric and a trim originally, but a little creative cutting (aka “cheating”), and I got it to fit!  I added the fun rick rack trim to the edges of my contrast fabric.  Both of the fabrics were purchased from Joann Fabrics and Crafts.

It was a fun little pattern and I can really see myself making more of these in the future, especially from the other versions in the pattern. If you want to read more about my project you can find it here on my blog.

The “Is it Spring Yet?” Dress

I made this dress using a pattern from 1938, Hollywood 1558.  I made this using a new lightweight cotton print with white cotton pique collar and cuffs, and vintage buttons and buckle.  This pattern was really clever in that it was designed for fabric to be cut on the grain, crossgrain, and bias, in order to play with stripe direction.  I made this in a button up style, though the original pattern had an option for a zip front shirtwaist as well.  It was a fun project, but cutting was a bit tedious!

More info and pics on my blog, Wearing History.

I wanted to share my latest finished project.  I just made up this jerkin from mustard colored corduroy with deep forest green accents.  I just barely had enough of the mustard fabric to squeak this out!  The body of the pattern is from Simplicity 3742 (from 1941) but since my pattern was missing a bunch of pieces I drafted some pieces and supplemented others from other vintage patterns.  I just had enough scraps left for my bound buttonholes, armhole facings, and I used the extra bias left over that I cut to make my initial on the top pocket 🙂

I don’t actually have anything to pair with the jerkin yet so an ivory blouse and dark green skirt have been added to my sewing list!

More about this project is posted over on my blog Wearing History.

Hello!  Wanted to pop in and share my latest project 🙂

Autumn has me dreaming of pretty 1950s frocks a la Funny Face, but first I thought I needed to address proper foundations to help the silhouette.  Since my last petticoat met an unfortunate demise at the paws of our two felines, it was time to re-address the petticoat question.  I had previously made over a 1980s prom dress from a thrift store find into a 1950s skirt, and I was never too happy with the shape.  I pulled it out of the closet as the perfect candidate for a make-over.  I cut it apart, and with the addition of some solid black taffeta, I had enough fabric to use the pattern I had in mind.

The pattern I used for this project was Simplicity 4137, a vintage pattern from 1953.  Mine is missing a front cover, but here’s the illustration image from the instructions:

I made view 1.  This pattern was EASY and was pretty fast to sew! It probably took me under 4 hours to sew, and I wasn’t moving fast.

I also have to add, in case any of you are thinking of making up this pattern, that the tulle underlay was NOT originally included in the pattern or instructions.  I just wanted extra fluff, so this is the piece that was cut straight out of that 80′s prom dress, just trimmed down at the top and added at the bottom of the petticoat yoke.  I think it does the job really well, and I’m also quite pleased at the extra body given by the taffeta! Below is an inside-out shot in case any of you are interested in attempting a similar project:

So that’s it! My latest little sewing project.  More on blog Wearing History. 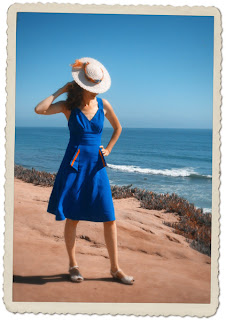 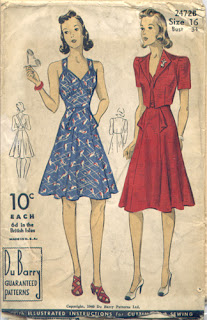 I just finished up this dress to wear to the County Fair last week!  I made it from a rayon/linen blend with fabric colors inspired by the 1939 World’s Fair.  More about this project on my blog here.

Hi there!
I just finished up this play suit from a vintage McCall pattern from 1940.  More info here on my blog. 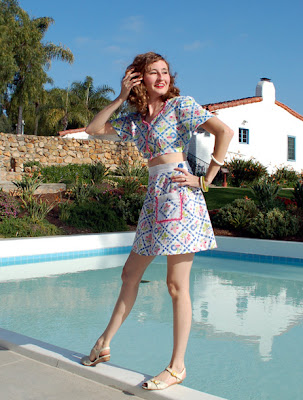 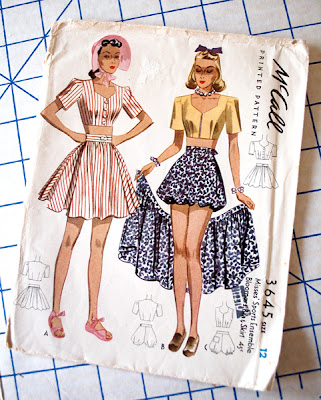 Hello from a New Poster :)

Hi there!
I’m so excited to join Sew Retro! My name is Lauren and my blog is Wearing History.
I love to sew pretty much anything vintage or historical… from the 18th century to the 1950s, but the bulk of my sewing is from the 1930s to the 1950s. I’m very excited to post among so many talented seamstresses and contribute to this blog!
Since I can’t really think of anything else to say about myself I’ll just post a few pictures of a dress I finished up this weekend: 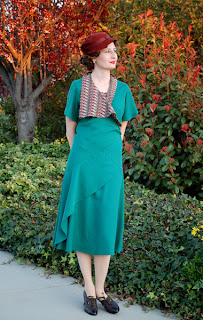 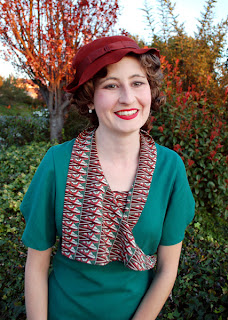 I made this dress from Eva Dress’ 1932 Tea or Street Frock from green rayon crepe and I used a vintage 1930s deco print fabric for my collar accent.  I had been holding onto this fabric for years waiting for just the perfect project to come along and inspire me, and this was the one!  This was a really fun pattern to sew for me. I loved the piecing and the drape and the lapped seams. Fun!  And I loved sewing with these fabrics, too 🙂  For more on this project feel free to visit my blog about it.
Thanks again for letting me join the team of posters here!

7 Comments
Contributor Login
Search the Site
Important Legal Stuff
Posts on this blog may contain affiliate links, which means if we enjoy a product and recommend it to you, and you decide we're pretty smart and go buy it, we get a few virtual pennies dropped into our "Cappuccino and a copy of Threads Magazine" coffee break fund.
You Might Like