My First Entry in the 2014 Historical Sew Fortnightly

So I decided to dive into the 2014 Historical Sew Fortnightly hosted by the wonderful Leimomi. She hosted the same event last year but most of the sewing I did fell outside of the dates for the challenges. This year the date has been extended to 1945, so my WW2 pattern stash can finally be put to work!  The first challenge was in spirit of the WW2 campaign for ‘Make Do & Mend’ a huge task for those on the home front in Europe and the US because of rationing. Ironically I chose a pattern that would have worked for last years challenge; a reprint of Simplicity 1353 dated 1934 from the Vintage Pattern Lending Library (Evadress.com also has a reprint of the pattern in a larger size, the one from VPLL is a medium) The pattern consists of a hat, collar, gloves, and a purse. I made the collar for this challenge from fabric left over from my 1937 skirt. 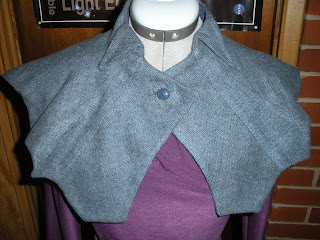 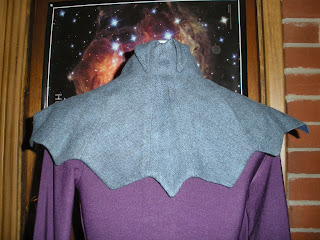 I had to cannibalize the scrap piece left to match the grainlines but it worked! I also lined the collar in some of the fashion fabric because of the reveres that would show the lining and also I wanted the front piece line in the flannel for warmth and stability. The other bits of lining came from my 1936 suit skirt  lining (again post to follow) but those grainlines don’t match up because the word cannibalize doesn’t even cover what I had to do to those scraps though I am proud to say I only had to piece together one section of the collar. This pattern is a good example of the “expectation and reality” of sewing because unless you are magic those points don’t come out as pointy as the picture and the revers aren’t quite as picturesque as the drawing, (till you press them within an inch of their lives and then tack them down.) But I am insanely in love with this piece and I do plan on making more. 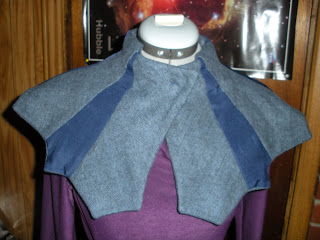 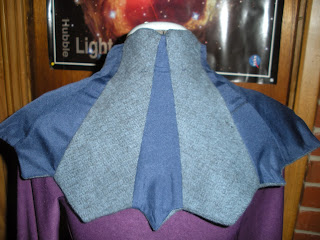 Hours to complete: It took 4 days of on/off sewing

First worn: Not yet. Audrey had the pleasure though I do plan on wearing it for an upcoming lunch date.

Total cost: Pattern $15 but since it has four items I’m saying the pattern for the collar cost $3.75, Fabric from stash, Button and thread also from stash. So all in all it cost me $3.75 to make.