well it’s actually a bathing suit from Mrs. Depew Vintage but I figured I would make a playsuit first and then go for the bathing suit. I made the one piece with a chambray colored lining and a pretty floral for the outside. I bought the PDF pattern from Mrs. Depew and started to print and tape it all out. I found that I was missing one piece and I contacted her; not only did she send me the missing piece (I had been sent an older version by mistake) she also gave me a complimentary pattern for the inconvenience. I love dealing with her because she is so sweet. 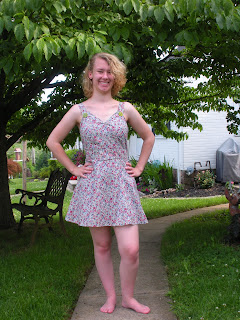 I had to size the pattern down which I did by cutting both pieces of the lining into thirds and taking out a half inch at each cut to bring the measurements from a 30″ waist to a 26″ waist and the 36″ bust to a 32″ bust. For the outside I took off 1.2 centimeters of each piece  in the middle. This was the first time I actually graded the pattern before I started cutting.

I ended up cutting the bottom shorts part off of my mock up and redoing it with a different pattern pattern because the Mrs. Depew pattern was made for swimsuit material, not non-stretchy cotton (kind of a no brainer there but I didn’t really think about it.) After fixing some minor problems I have to say that this playsuit was a complete success! The only other adjustment I made was to put a panel in the front and side front pieces because I didn’t have enough fabric to cut out the front in one piece and to make it look like it actually belonged there I treated the side fronts the same. I added two green buttons on the front near the straps for decoration. Also I had to adjust the hem on the shorts so they wouldn’t peak out from under my skirt.  M says he loves it (though I have suspicions that it is because of the somewhat shorter length…) and I plan on making another one at least. The only thing I plan on changing on the next one it to make the waist a tiny bit bigger. That idea  came to mind because the first time I wore this out it was to breakfast with a friend and we ate a lot of food! 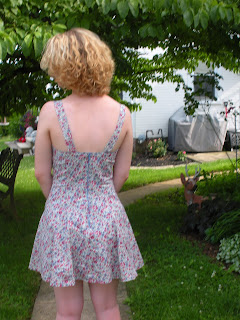 The Scoop:
Fabric: 100% Keepsake Calico Cotton Symphony Denim Blue 3 yards (one from the first try and two for the second leaving me with a yard extra) and 100% Cotton Keepsake Calico Flowers Cream 1.5 yards

Pattern: Mrs. Depew Bathing Beauties and Butterick 2198
Year: 1940’s bathing suit pattern mixed with 1960’s shorts pattern
Notions: One zipper and two decorative buttons
Hours: I try not to keep track between the redrafting and failed first run it took a good bit of time.
First worn?: July 14th 2012 to lunch with Julianne
Wear again?: Yes!  I wore it to the beach last summer and this summer for Arts on the Avenue 2013
Make again?: Yup but with more waist room
Total cost: Pattern $5 Cream Flower fabric $8.39 Chambray type fabric $5.97 Buttons $1.37 and Zipper $3.29. The thread was from my stash, so the total comes to $24.02
4 Comments