Homage to Jacques Griffe, and a query

The inspiration for this dress came from a Jacques Griffe design that I have adored for ages. Everything about this photo of actress Suzy Parker I find lovely. The fullness of the skirt, with all those tiny pleats (they almost look like cartridge pleats to me) paired with the simple, clean, satin jacket and dainty black shoes is to die for. The colors in the photo are, while not vibrant, rich and warm, and the expression on her face, and the movement in her pose are just lovely. I found this fabric at a Ben Franklin’s ages ago on their flat folds table, and I think I paid about $3 or $4 a yard for it. While I’m not 100% sure of the fabric content, since that is hardly one of Ben Franklin’s top priorities, it definitely has a lot of rayon in it, if it’s not all rayon. The weight and drape of it are wonderful though, and I knew from the get go that I wanted to make something with a big full skirt like this one. I bought all they had, which ended up being about 6 yards I think. It’s been sitting in my stack for about two years and I finally got around to sewing it up. The colors reminded me of this photo and I decided to use Butterick 4512 again, making the bodice from a solid black to mimic the black jacket in Giffe’s design. 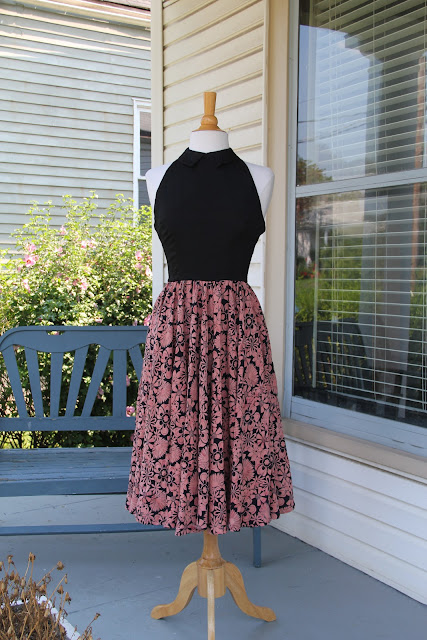 Ever since I used this pattern for my white a and blue polka dot dress last summer I’ve wanted to use it again, because I like the way the top fits, and the overall shape was so nice. I only used the bodice for this version though, adding my own, extra-voluminous skirt. Other than the skirt alteration, the only thing I had to change about the pattern was the same neck adjustment I made the first time around. The sides of the halter neck were much too loose on me, and so I tightened them up a few inches total to bring the neck up higher and to eliminate the gaping around the top of the bust in front. The fabric for the bodice I found on a clearance table at JoAnn’s (although the clearance price wasn’t all that cheap). I only needed a yard, so it wasn’t bad though, especially since the skirt fabric was so much cheaper. There is a little bit of pulling that happens at the darts on Tabitha since we are not exactly the same proportions, but it lays more smoothly on me. 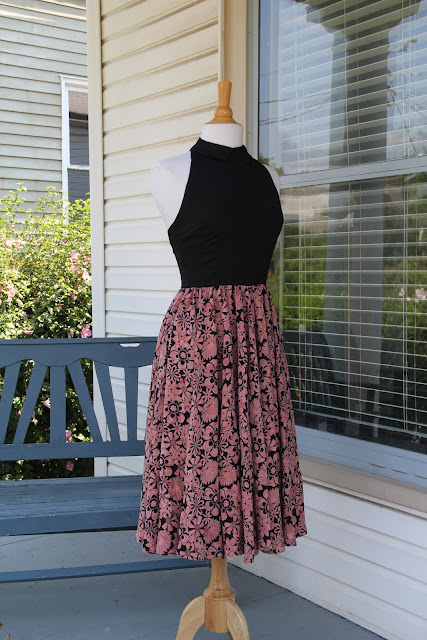 The skirt is a 1.75 circle skirt. I didn’t have enough to get two full circles out of it, but one and three-quarters circles is still a pretty voluminous skirt, especially with a crinoline under it. I love the black one underneath the skirt in the Giffe original, but I don’t have one and have tulle to make an ivory one next, so the black will have to wait. While the shape I get with my current crinoline is great, I don’t really care for it. It is too heavy and tends to not lay evenly all around, so I’m going to make myself a new one.

I decided to monogram the collar, since I don’t have anything monogrammed and have been toying with the idea on several other garments for a while. I opted for a very subtle black on black “E” on the left collar point. While not perfect, it came out pretty well for an only slightly planned first attempt. 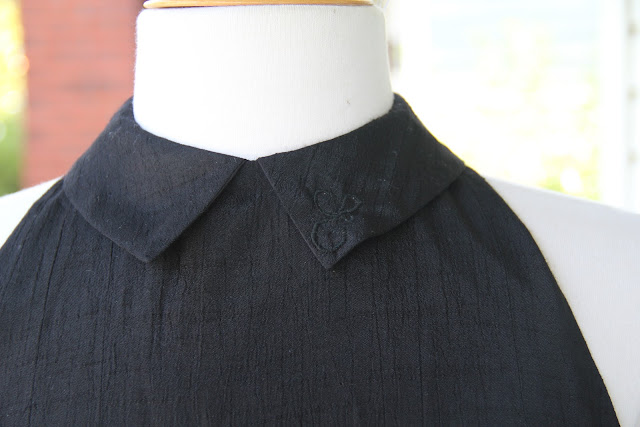 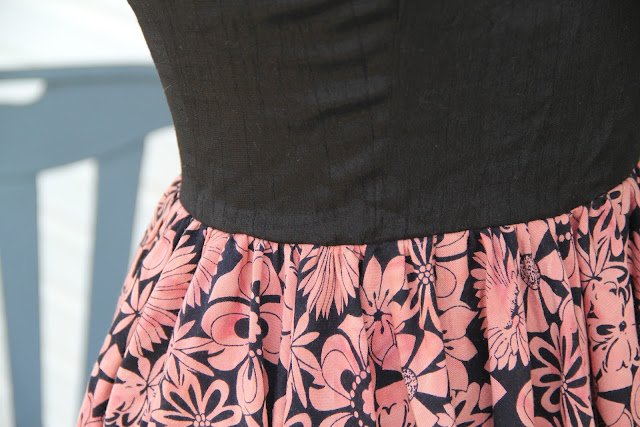 My original plan was to pleat the skirt in tiny knife pleats, but I ended up not being able to get the necessary width at the top to do that many little pleats and still have the length and fullness that I wanted at the hem, so I ended up just gathering it onto the bodice and am overall satisfied with the result. Getting the hem even on such a massive skirt was a complete bear, and there are still a couple of places that need to be adjusted; that is, if I ever get to a point where I care enough to make the minor adjustments to a skirt that moves around so much no one will likely notice the imperfections anyway.

After looking back at my finished project, I think that one of the things that I enjoyed most about this dress is that it reminds me of a project that I did in high school. During a visiting artist session with Lee Mingwei at Oxbow we did a project that reflected on the subject/issue of copying in the art world. Mingwei addressed the issue we have in the Western world with the idea of copying another art work; something that is generally perceived as low, uncreative, unoriginal, or even stealing. Through his work with us he wanted to emphasize the importance of copying others (especially older artists) in the education of artists for centuries, not only in the Western hemisphere, but particularly in Asian artistic traditions. In both areas of the world, copying the old masters was how a student learned to handle their medium and their subject, studying the work and technique of their predecessors directly and actively. This process seems to have lost value in the the modern Western tradition in particular. He provided us with a list of 21 modern artists, and we were each asked to choose one artist and one piece to copy. The term copy here, he used rather loosely, telling us we could copy directly, copy form, copy palette, copy subject, whatever it was about the piece we found interesting or compelling. I chose Pat Steir, an artist whose work was as far from my comfort zone as I could get. The painting that I chose is entitled Green One.

I can’t currently find the disk that has my portfolio photos on it, and I don’t have a copy of them anywhere else, but I’ll try and find a picture of my version soon. I would just take another photograph, but it’s about 3.5’x6′ and it’s off the stretcher bars, so it would be a little tough to do. Anyway, the point of the project was to use the copying process to help further our skills and develop our own artistic visions through a slightly more focused path. I think this same concept applies to a lot of the things that I and many of you other sewers create, but in my opinion at least, there is a different attitude toward the concept of “copying” in the sewing world than there is in the art world. Whether this has something to do with the (in today’s world) more mainstream and visible nature of fashion and fashion design as compared with the very closed art world, or because of the wearable, functional aspects of clothing as an art form. I do think the comparison is an interesting one, though. What are your opinions on the subject of copying (I again am using the term rather loosely)? Do you see it as a helpful, productive step in one’s development as an artist/creator or as something that should be avoided in pursuit of the truly innovative and unique? Are the two things mutually exclusive?