i’d been working on this specimen for this week’s “sew weekly” challenge, “reality check.”  what can be more of a wardrobe staple than a black skirt and white top?  but of course i took it in a bit of a weird direction.  otherwise, what was the point?  i had some very specific inspiration on this one.

also causing palpitations of envy was steph c’s april BCT “hack,” where she re-drafted her classic “blank canvas t” based on several classic 40s details, including a keyhole neckline and a bolero.

for the top, i used my alabama studio sewing + design (with which i have been having a serious affair lately) t-shirt and bolero patterns.  i kept the skirt from S1927.  i ended up with some fascinating construction order on the skirt, let me say.  the original pattern calls for a faux overskirt, made by strategic placement of a ruffle above the hemline of the skirt.  it’s actually a very cool bit of pattern drafting, and i should have realized that in the 40s they wouldn’t be wasting fabric on an overskirt layer.  still, after some consideration, i decided that i wanted an overskirt on mine instead of a giant ruffle, so that’s the way i went.  i trimmed the overskirt with a cool lace, also from daytona, and both fabrics were stiff enough that i got some great volume from the intense fabric gathering called for in that waistline. 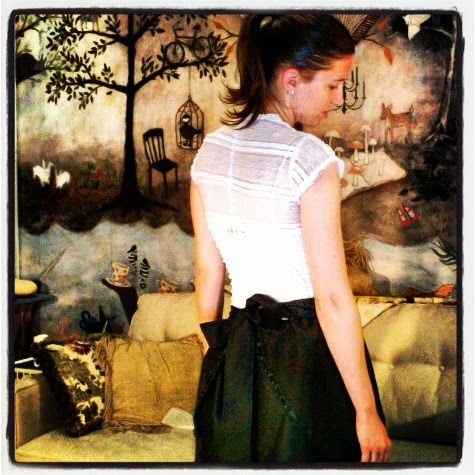 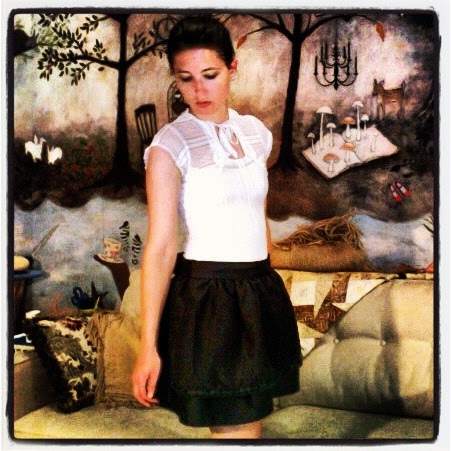 full post and a couple of bonus cat photos at puu’s door of time.