An introduction and a 50s blouse

August 17, 2011 Archive from Blogger
Hi!
My name is Eva and I’ve been sewing on and off since I was fourteen back in 1982. The real obsession started around ten years later when I joined the SCA an started making medieval, and later other historical, clothing. Then I started making more and more of my everyday clothes, especially skirts and a few years ago I got into retro fashion and sewing. I started with 50s styles, but later got more and more into the 40s, which is what I mostly make now.
However, this blouse is made from a mid-50s pattern, Vi Mönster 3601, which is a Swedish brand. I plan to make the dress too later. 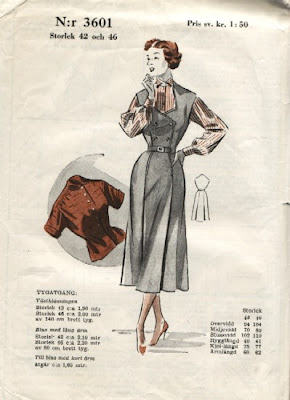 It is size 46, which is equal to size 18 and despite that I am a size 20 the only changes I had to make was taking in the shoulders two centimetres on each side. My shoulders are a size 10. Thanks to the ease built into the pattern it fit well except fot the too wide shoulders. I made a small mistake when cutting out the pieces, so the stripes on the yokes are not identical but I couldn’t be bothered to unpick everything when I noticed. 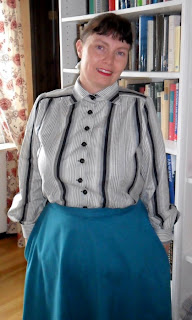 One of the things I like best with the pattern is the collar, which is just a straight band in the back in the back, but has points in the front. 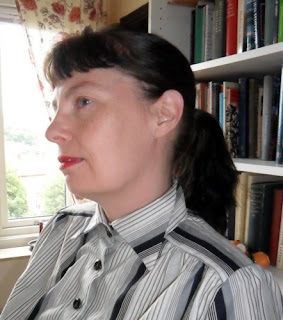 I found the fabric at a thrift store and my guess is that it is from the 1950s 0r 60s and that it was intended as for example lining in suitcases – it was only one meter wide and waxed or treated with something else that made it slightly shiny and stiff. That disappeared when I washed it however.
You can see more of my 20th century retro clothing here at my website and the historical costumes here. I also have a blog in swedish, which has quite a lot of photos of retro clothes I’ve made.
5 Comments