I’ve tried making this blouse before and it has been so difficult to get right. I think I’ve finally hit the right version with my muslin. The final product will be made in a lightweight voile, so I needed a lighter weigh muslin fabric. I went with a batik gown/robe and unsewed it so I could use the fabric. The front of the robe made the front of the blouse and the back of the gown made the back of the blouse to take advantage of the border prints.

It took me the better part of the day to re-grade this blasted thing. I’d swear it was some kind of weird sewing calculus that was necessary. My only complaint is that the armholes were a little big and the back neckhole was a little high. But those are issues that are easily fixable on the final version.

My opinion of this “muslin” is that it’s darn close to perfect, actually. I’d already made two wadders out of this pattern last spring, hence the term “nemesis”. I will say that it has a huge amount of ease – easily 4-6″, but when wearing it, you wouldn’t want any less. The down side is that it makes me look the size of a small outbuilding. Perhaps a garden shed but not quite a barn. Which is why I don’t take pictures of my stuff on me that often! But just for you – and all the millions on facebook – I did. 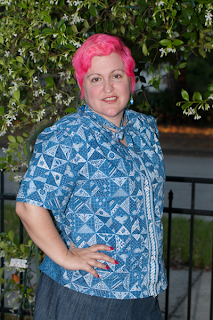 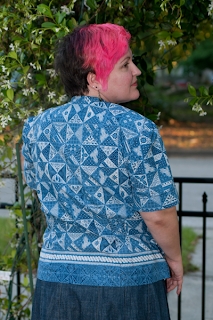 The nice thing about this fabric is that I totally cheated and did NOT have to make the bottom hems or the buttonhole placket because I used the front bottom of a robe and the back bottom of a nightshirt.

You probably can’t make out the pin tucks on the front of the shirt, but they’re there! Three each on either side of the front. There are also waist darts at front and back. I even reused the four buttons from the nightshirt!