Little Boy pants and a shirt

I just completed this outfit for my son for a 1914/15 project that I had worked on last year so that he could join in with the rest of the group at a function held on Friday night. To make this up I chose an Ideal Pattern (by Montgomery Ward & Co which appear to be the Mail Order Company). 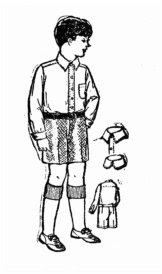 I chose to make the button on Eton collar, but he really didn’t care for it much. The only things that I changed about the pattern was leaving off the top pocket, and the buttons that hold the shorts on to the waistband of the shirt, because he really wanted to wear braces with it (he has just seen the Ecky Thump episode of ‘The Goodies‘ and was desparate to wear the braces….)  I also made the shorts 2″ longer to match a photo of a boy from this era.  More on my blog

Does anyone out there know much about the Ideal Patterns? There was no date on the envelope and googling hasn’t revealed much about them either – slightly more about the Company Montgomery Ward.  I suspect that this pattern was originally from the 1920’s but I haven’t much to go on.

*Edit*
Here is what the front of the whole pattern envelope looked like:

Thanks ever so for looking!