my winter sewing hiatus has ended! i much prefer sewing skirts and dresses for warm weather. i bought both the pattern and the fabric for this dress on ebay. i love, love, love 70’s sundresses! this one is dated 1977. miraculously, the only fit adjustment i had to make on this pattern was the hem. i also lined the bodice- the pattern called for facings, but i wanted a little extra coverage in the front. also, the pattern said to use hook and eyes on the back straps, but i used buttons instead. i hate sewing hook and eyes and i think the buttons look cute. side note: i did sew a hook and eye above the zipper- i’m not that lazy. 😉 didn’t have anyone around to hook it when i took the pic though. the dress kind of flattens out my already tiny front, but i’ve never been a girl who’s worried about my lack of. this was such a cinch to sew and i’ll most likely make another one in a solid color. i think next time i’ll lower the neckline a bit, but all in all i’m happy with it. (please excuse my scabby, banged up legs…when i’m not sewing i’m rock climbing…doesn’t make for pretty legs.) 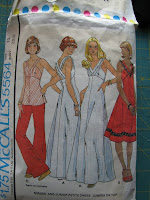