Butterick 4790 aka "The Walk-Away Dress"

Today, I’m showcasing my version of Butterick 4790, the “walk-away dress”. I used the reprint of the 1952 pattern. I think I may have cut it a size or two smaller than my size shown, based on the measurements listed on the pattern. It’s a little tight around the waist, but that’s okay.

I bought the space alien fabric a while ago and had decided I wanted to make it some kind of lining, with the outside being fabric that resembled space. I found one that was flecked with glitter, but the simple black taffeta looks better with it, I think. Even though you’re only supposed to edge part of it in bias tape, I did the whole thing with alien-green bias tape (which took somewhere from 3 to 5 packages, I don’t quite remember) and I think it adds a nice touch. 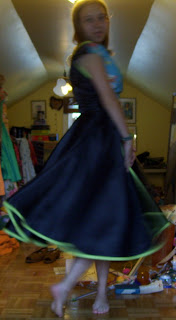 This was my first time working with taffeta, and I really love the way that it holds its shape so well. Even without a crinoline, you still get that full effect in the skirt. I think that the final product is out-of-this-world, if you’ll pardon the pun.