My name’s Cassie – I love to sew and knit… particularly from vintage patterns. Alas, I don’t have the time to do this half as much as I’d like to.

So, by way of an introduction, here’s some pictures of a 1940s (?) knitted sweater which I finished in 2007. (I haven’t really tried taking photos of myself before – sorry they’re a bit blury!)… 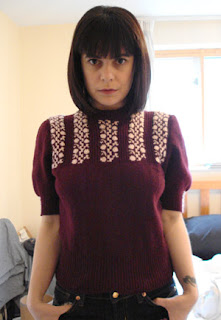 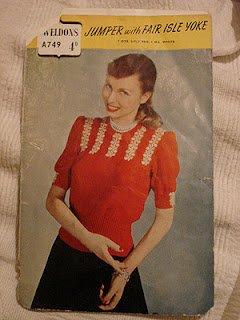 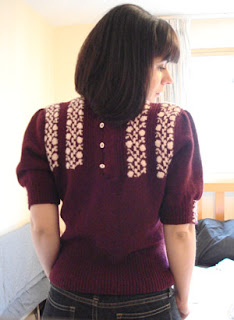 Overall I was pleased with how it turned out (except the back of the neckband, but that’s hidden by my hair!)

It was a real pain to knit though – each panel/band at the top is separated by ribbing, so to keep the elasticity, I couldn’t carry the light yarn between the panels and I used a separate ball for each panel. I spent more time untangling than knitting! 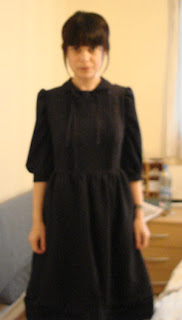 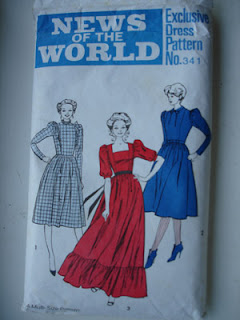 And here is a ‘work in progress’ that I started last autumn. It’s based on a pattern from the News of The World from the 1970s(?) (the News of the World is a rather trashy UK newspaper – did it really once give away dress patterns!?).

I just need to finish attaching the bottom band but I’ve stalled… partly because I don’t think I’d ever wear it. Peter pan collars and puff sleeves are a bit tricky to wear when you’re in your 30s and want people to take you seriously!