I’ve been sewing and knitting again and have added two new basics to my wardrobe.

The skirt is made from green twill and McCall’s 7032.

The sweater vest is a sports vest made from a 40s pattern in A Stitch in Time Vol. 2. It was quite fun to knit up.

I also opted to wear a new vintage hat with this outfit! I just adore hats even if I’m not much into millinery.

Who else here enjoys vintage knitting along with vintage sewing?

More details on the blog: http://star-spangledheart.blogspot.com/2014/02/back-to-basics.html

A Victorious Miette in Navy…

I know we’re  mostly supposed to just post about sewing here on We Sew Retro, but I have seen a few gorgeous knitting projects pop up from time to time and I’m so proud of the first knitted garment I’ve ever made, that I couldn’t help but post it here. While we’re only one month into 2014, I think it’s safe to say that my Navy Miette will probably be the garment I’ll be most proud of in 2014. It’s wearable, comfortable, warm, soft and, if you don’t mind me saying so, it’s DARN (yarn?) CUTE! 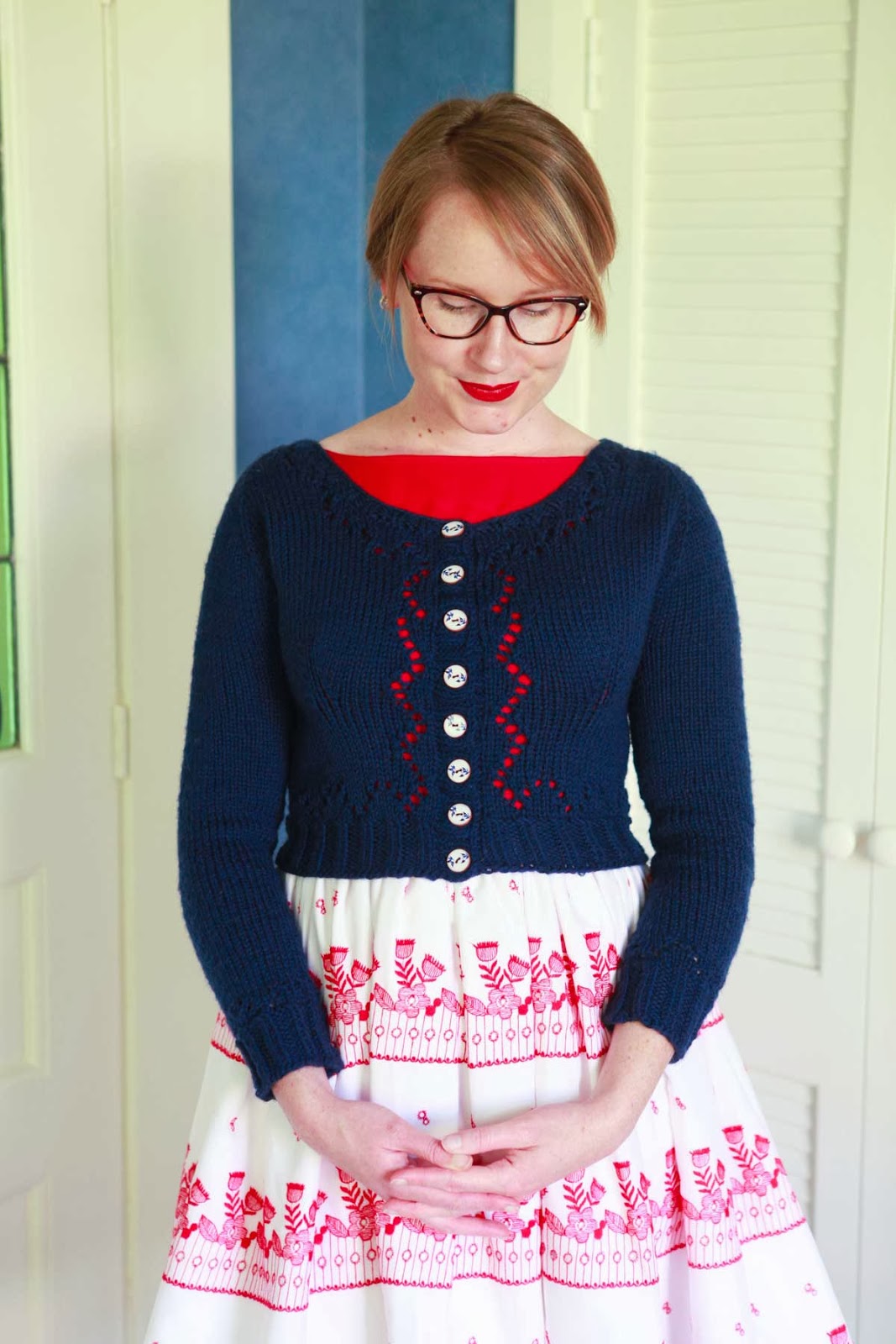 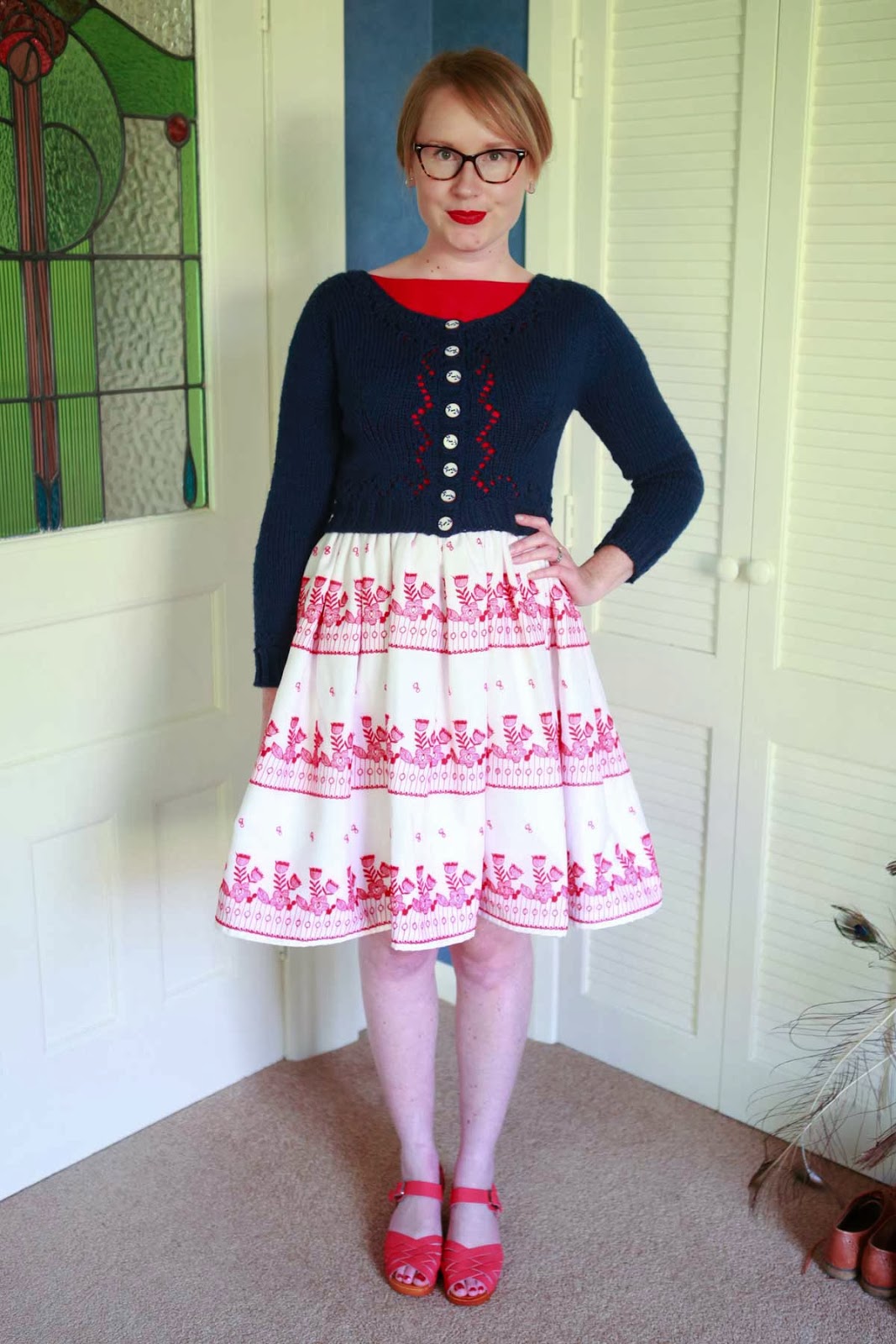 My Miette is in no way perfect. There are places where I lost count, couldn’t remember what row I got up to or dropped stitches. There was even that time I knit my first sleeve on the wrong sized needle and I didn’t have the heart to frog it so knit my second sleeve on the wrong size as well so that they would at least match…um, yeah. I also probably should have knit up a size larger in the bust – it’s not a major issue fit wise, but the shaping around the bust stretches a little too much for my liking. I guess figuring out negative-ease comes with time.

The only major thing I changed was to add 30 extra rows to the sleeves to make them longer and therefore more winter appropriate. I found that if I stopped where the instructions told me too then the sleeves would have been a weird length on me – too short for bracelet length, but too long for short sleeves – and I probably wouldn’t have ended up wearing it.
I also opted to leave out the buttonholes in the pattern instructions. Instead, I hand-sewed on navy grosgrain ribbon to the back of each button band before doing them by machine. In hindsight, I’m not sure I’d do it this way again, but it works for this cardigan and I’m happy with how they turned out. 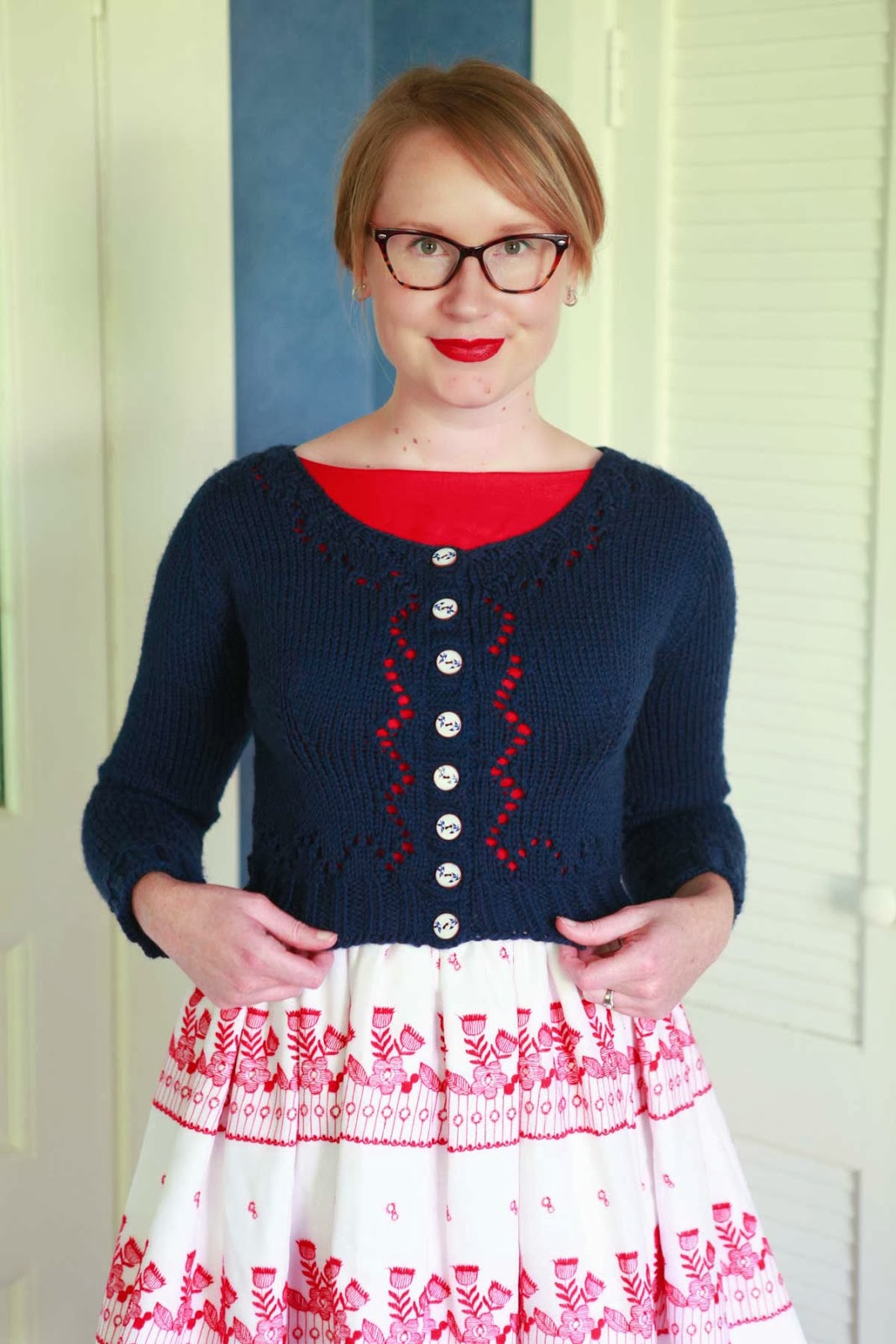 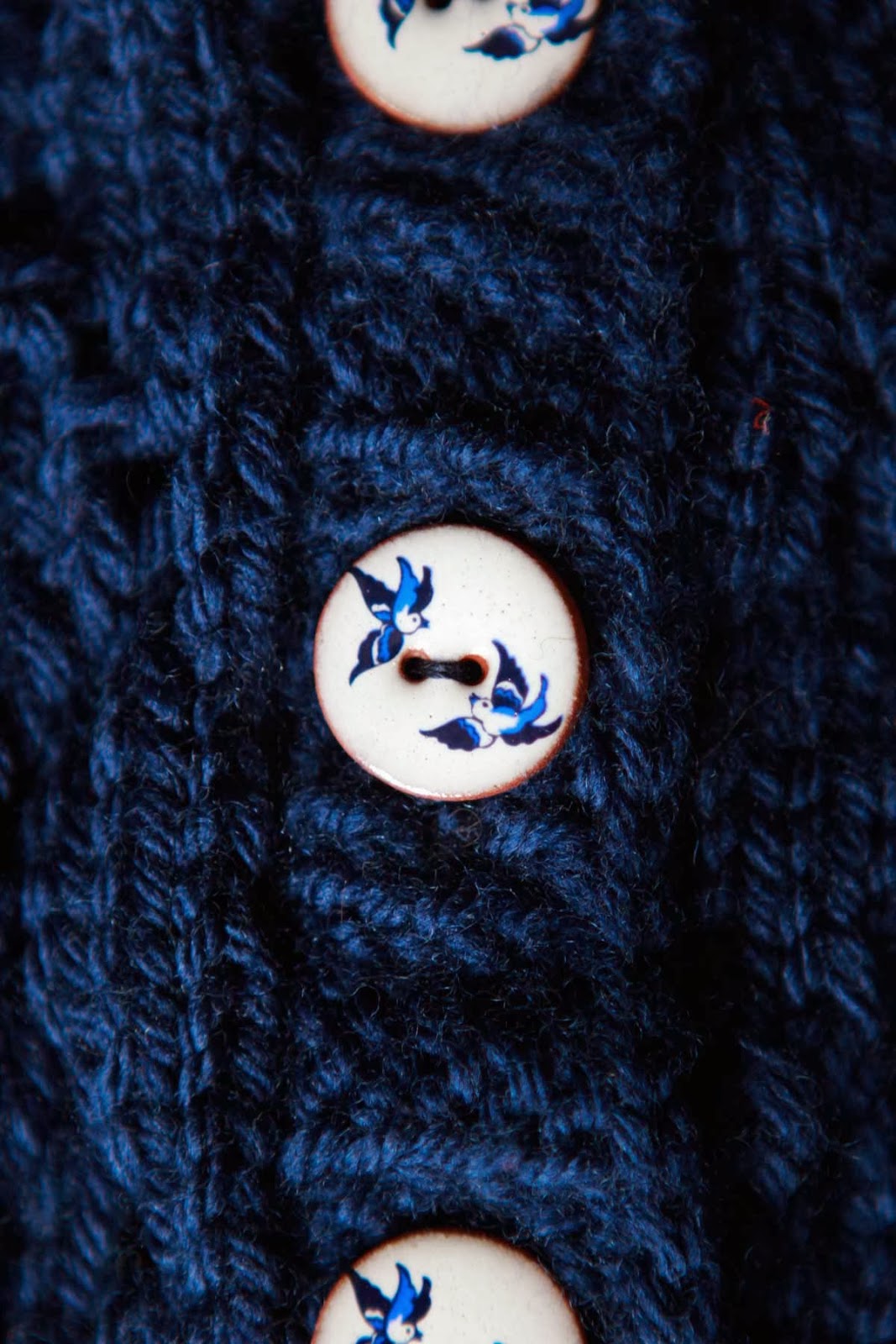 For more pictures and information about my Miette, you can pop over to my blog or Ravelry note page.
Do any of you knit as well?
xx
Jen

I can’t believe how much time I spent on this sweater! At some point during knitting, I had good hopes of finishing it before Christmas…

This is the second real garment I’ve made on my old knitting machine. Again, it’s based on a pattern from the 1950’s (1957, to be precise) and this one was written especially for knitting machines.

Which is why that yoke is made from ten separate pieces. I could see the potential of the sweater but I didn’t like the design on the yoke, so I decided to play around with the knitting machine’s fair isle option instead. I made my own fair isle design, adapted to the shape of those yoke pieces.

Knitting them was a bit of a learning curve (my apologies for the blurry picture, it was already getting dark again and the camera flash doesn’t like black surfaces). I think I got the hang of it about half way through.

And all the rib bits were  a bit of an issue because mine a single bed knitting machine (you need a double bed for rib knit). In the end, I used the fake rib suggested in the manual.

Sewing together all those pieces was quite time-consuming as well. I finally finished the sweater on 1 January.

It’s really comfortable and I’m particularly proud of how my fair isle design on the yoke turned out.

I blogged about the work-in-progress here and about the finished article here. Although this is a knitting project, not a sewn one, I thought that it would be of interest to WeSewRetro readers as I know a lot of sewists also knit. This sweater is from a modern book that published a collection of vintage patterns called Vintage Knitwear for Modern Knitters. This pattern is originally from 1939, but a woman that knit this sweater when the pattern was published in 1939 certainly would have continued to wear it through the 40’s making it WWII era.

The buttons on the sweater are also vintage, although I’m not sure from exactly when. They were among a collection of vintage buttons that I have inherited from a couple of different sources and have clearly come off of a used item or have been banging around in a jar for a very long time as they have dents and scratches. I purchased the modern shawl stick although I intend to do a bit of research and find a more period appropriate design. If anyone can point me to information on that end, it would be appreciated! I have more information on the sweater construction on my blog and on Ravelry for those that are interested.

If anyone reads my Blog they quickly figure out I have a soft spot for the 1940s! This jumper took me 5 months to knit, and I hope it’s OK to post here on SewRetro.

It’s the Bell-Stitch Jumper from Stitchcraft Magazine, Jan 1944. It pairs really well with the navy skirt I made from the popular Simplicity repro 3688 (posted last year on WeSewRetro). I wear this skirt all the time, it was so easy to make, I really recommend it.

Add a 1940’s celluoid brooch and hair scarf, and i’m set to go! I love this look, but 5 months of knitting? Ouch. I’m switching to DK weight for the next project so I can finish it more quickly and not go quietly insane.

Most recently completed project: my Quick-to-Knit Target cardigan, finished as part of a knit-along starting on January 1st. As you can see from this, it is quite quick to knit – at least by my standards!

Paired here with my 1940s hand-sewn Simplicity 2624 skirt: and when I say hand-sewn, I mean that every single stitch, including the top-stitching, was set by hand. You really get to hate waistbands… so long and so unforgivingly straight….

The cardigan is knitted from a 1950s pattern on Bex’s blog, although there are a few fitting issues.

Unusually, the vintage pattern sizes given don’t actually go small enough for me – I didn’t think this would matter, but I and others who went for a size up in the hopes that it would just give a loosely-fitting cardigan found that we didn’t get the result anticipated 🙁

In fact, the cardigan is both too wide and too long


although as I have a swayback issue anyway (see the skirt) this may not be entirely the fault of the sizing. But the waist of the cardigan is too low for me, while the neck shaping actually starts too high (straining the top button) and there’s a bulge of spare fabric on either side which tends to droop in an unfortunate manner.

Looking at the adjustments between pattern sizes as given on the pattern, I ought to have shortened it by half an inch and decreased the bust by two inches. I already had to un-knit both sleeves from the cap down to decrease their length by an inch each – but again, that’s a problem that everybody seemed to have, many of them more acutely than I. (At least one knitter omitted the 3″ ribbed cuffs altogether in order to get the right sleeve length!)

The skirt suffered from the opposite problem, but that was due to my carelessness; I bought the pattern to fit my waist without noticing that I was a bit more ‘wasp-waisted’ than 1940s patterns allowed for (oddly enough the 1960s patterns, which one thinks of as boyish and shapeless, changed to use a bust-hip-waist ratio that fits mine exactly) and had to steal extra half-moon segments out of the seam allowances at the hips to get it to fit at all. If I had only read the pattern measurements before tracing off the pieces I could easily have made the adjustments at the pattern stage!

However, it fits nicely now and pairs very well with my high-waisted 1930s knitwear patterns (which is what this ‘fitted’ 1950s style is trying hard to revert to, by the looks of it…)

The fold at the front is actually a false fly; the skirt fastens with hooks and eyes up the side. The whole ensemble is very recycled. The cardigan is made from a single large scrap ball of blue acrylic that I saved from being thrown away, eked out with half a dozen small scraps of the shiny garnet red wool, while the skirt was cut out from the panels of a size 20 elasticated blue twill skirt that I got out of the rag heap at the local charity shop. In fact, because the original had more, smaller panels than my new pattern, I had a great deal of difficulty fitting the pattern pieces in and had to piece together the lower corners, godet-fashion 🙂

4 Comments
Contributor Login
Search the Site
Important Legal Stuff
Posts on this blog may contain affiliate links, which means if we enjoy a product and recommend it to you, and you decide we're pretty smart and go buy it, we get a few virtual pennies dropped into our "Cappuccino and a copy of Threads Magazine" coffee break fund.
You Might Like