Some of you may have seen my post on McCall’s Krizia patterns, released in the late 1970s to early 1980s. I sewed up the playsuit from one of my favourites, McCall’s 6624, a playsuit and wrap skirt pattern from McCall’s “Carefree” line.

It’s a short and strappy playsuit, with the bodice and shorts pleated into a midriff band, a combination zipper fly/button front, and shaped side vents on the shorts.

I had a sparkly stretch knit found at Fabricland that seemed suitably disco. The pattern isn’t specifically for stretch knits, but one of the recommended fabrics is synthetic jersey.

My wife photographed me by an awesome local graffiti mural—a collaboration between two Toronto artists:

More photos and construction notes on my blog…

I recently bought a small stack of 1980’s Kwik Sew patterns of of eBay. I don’t usually go for the 80’s, but there were a few that were super cute and the price was right. I didn’t have any immediate plans for them, but figured something would pop up in my fabric stash that would go with one of them.

The last few days I’ve been picking out pieces of fabric, either stuff I honestly can’t fathom why I ever bought it, or large remnants from past projects to list of eBay. While I was sorting through it all, I came across a piece of fabric that had so far proven too small to use for anything. I fell in love with it and ordered the very last 1.5 yards a few years ago, but I didn’t want to make a tank top, and so far that was my only real option aside from a top I had just made a few days previously and I didn’t think that fabric was right for it.. Then I realized Kwik Sew 1425 only uses a little over a yard of fabric. I decided to sew view B, but without using contrasting fabric for the sleeves, which makes it the same as view C, without the straps in the back.

The entire project took about 2 hours from start to finish, mainly because I had to rip out a couple of seams. I say its because I used a perfectly matched thread color- if I had used a contrasting thread, there would have been no mistakes, and everything would have gone perfectly. I also finished the neckband and sleeve ends a bit differently from the instructions. I used a size Large.

I’m very pleased with the outcome, though if I make it again I’d add a few inches to the bottom. I didn’t hem the bottom edge because if I had, this would nearly be a belly shirt, and I didn’t want that. I also really like my fabric choice for this. I also really like the way the back is low, but not bra-strap-showingly low. Its a nice scoop and constrast to the high neckline in the front.

Excuse the face I’m making and the yoga pants. I usually take photos with my good camera and a tripod, but my camera died, and my boyfriend apparently doesn’t know to take the picture when I’m not making faces.

I figure I was lucky to get him to snap them at all. :p I’m pretty sure I’ll get a lot of wear out of this top though, even if I was making faces for the photos.

Although this is a knitting project, not a sewn one, I thought that it would be of interest to WeSewRetro readers as I know a lot of sewists also knit. This sweater is from a modern book that published a collection of vintage patterns called Vintage Knitwear for Modern Knitters. This pattern is originally from 1939, but a woman that knit this sweater when the pattern was published in 1939 certainly would have continued to wear it through the 40’s making it WWII era.

The buttons on the sweater are also vintage, although I’m not sure from exactly when. They were among a collection of vintage buttons that I have inherited from a couple of different sources and have clearly come off of a used item or have been banging around in a jar for a very long time as they have dents and scratches. I purchased the modern shawl stick although I intend to do a bit of research and find a more period appropriate design. If anyone can point me to information on that end, it would be appreciated! I have more information on the sweater construction on my blog and on Ravelry for those that are interested.

After listening to the blog world flip out over this trouser pattern, I finally jumped on the bandwagon & made some for myself. You guys – they are TOTALLY deserving of all the fuss! Such a great, simple trouser pattern, with a nearly perfect fit out of the envelope. Consider me in love 🙂 Mine are made with a very lightweight denim chambray – probably a bit *too* lightweight, as all the wrinkles show (and then some that don’t even exist in real life, ahaha) & they sort of look like pajamas. But they are classy pajamas… right? It’s 100* here right now, cut me a break 🙂 The only alteration I made was to extend the back crotch about 1/2″ to make some extra room for my butt, and taper in the waistline to fit my waist. I don’t understand why the smallest size offered is a 10, by the way. Where is the 4-8? I also made the crop top – it’s McCall’s 4488 from 1975. It’s a little scandalous for every day wear, but totally works with the super high waist of these trousers 🙂

Thanks for looking! As always, there is more info/pictures on my blog, LLADYBIRD.

Hello, everyone! Well, this is my first time posting on the new and improved site, and I am loving it!
I made this dress for the Burns Supper that I hosted a few weeks ago. 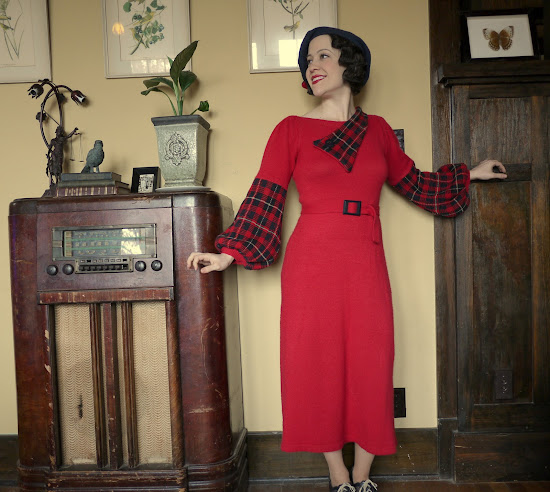 The plaid parts started out as a huge vest from Goodwill, and the equally large red sweater dress was an etsy find: 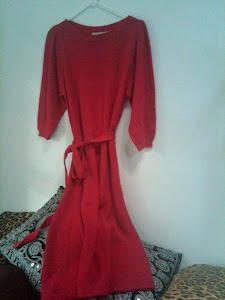 I started by removing the sleeves in order to move the shoulders up and take in the sides. The sleeves were originally gathered at the shoulder, but I wanted the shoulders to lie flat for a smoother line down to the bell, so I put in a series of radiating darts. The sleeves were three-quarter length, so I cut off about six inches so I could add the lower parts. I reattached the sleeve band to the bottom, which I had gathered. I was very proud of the way these turned out; I had to do a lot of measuring (which is not my forte) and drafting, and they ended up exactly as I had planned, which is rare for me!
Luckily, it came with a tie belt, so I just cut it down and put a vintage buckle on it. I used the extra red material from the sleeves to back the collar and the insert for my hat, which I sewed from an old navy sweater. The plaid collar comes from behind the shoulder and is stitched in place with a vintage button. 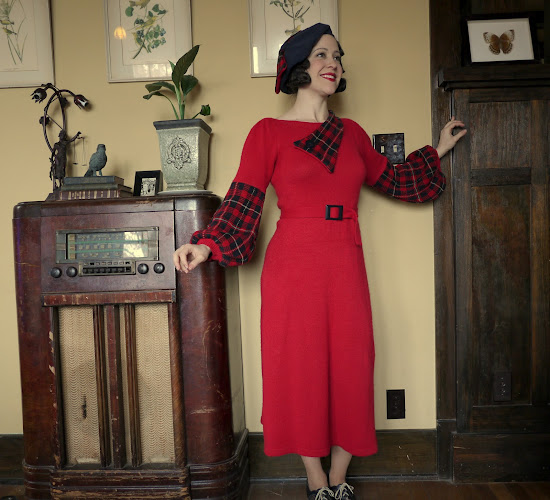 This dress took me about three days to make, most of which was spent planning, measuring, and drafting the sleeves, and then procrastinating because I was afraid that my measurements were wrong!
You can see more pictures and details of the dress, along with some 1930s images that I used for inspiration, on my blog!

19 Comments
Contributor Login
Search the Site
Important Legal Stuff
Posts on this blog may contain affiliate links, which means if we enjoy a product and recommend it to you, and you decide we're pretty smart and go buy it, we get a few virtual pennies dropped into our "Cappuccino and a copy of Threads Magazine" coffee break fund.
You Might Like