I planned on making this top before I signed up for the vintage pattern pledge but by the time I found the perfect fabric it seemed like fate had stepped in and now I’m amending my pledge to include vintage inspired as well! For my vintage pattern pledge I vowed to sew up at least six of my vintage or reproduction sewing patterns. Since Coco says right on the pattern envelope that the optional funnel neck is sixties inspired and my inspiration came from a show set in the 60’s, I think its acceptable to count it as one of my 6. 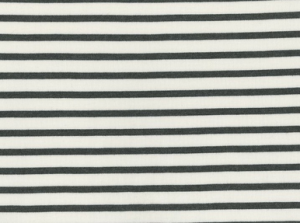 I decided to keep checking some of my favorite fabric resources regularly and eventually I’d get my Patsy Coco. I got really lucky and found this interlock knit from Hart’s Fabric just about a month after making my pledge! I would have preferred a slightly larger white stripe but come on, look at this fabric, how could I say no when it was roughly a 98% match?

Now that I had my fabric it was time to get serious about construction. I knew I would be using the Coco top with the funnel neck but there were a few considerations to be made. From the screen shot I took and watching the scene over and over, I decided to make the 3/4 sleeve version of Coco because some of Patsy’s arm is clearly visible but I don’t see any bulk that would indicate long sleeves pushed up. There is no indication that the shirt is cuffed but I really like the look of the Coco cuff with the funnel neck, I think it adds more vintage flair, so I decided I would use that pattern piece. There is never a point where you get a good shot of the sides so should I do the slits of not? Since I had never done them before I seriously considered it but was more concerned about pattern matching my stripes and opted against it. Sometimes I surprise myself with the level of detective work that I put into the things I sew.

To read more about the construction (and see the finished top!) head on over to my blog.