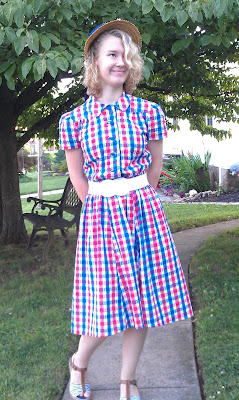 Happy Independence Day Everyone!! (well now it’s a bit late because I didn’t get my picture up in time)

This year I decided to make a dress for the 4th. M was going to take me to Community Days to walk around and then Saturday are the fireworks but we watch them from the roof. I didn’t tell M what I was making and only gave him hints over three days. I sent him a picture of the fabric, told him the pattern was from 1939 and then told him it was a dress. I used Du Barry 2347B from 1939  and made it with short sleeves. I love the dress. It’s light and airy because of the seersucker fabric which was a blessing because it was sooo humid at the fair. I took 6″ off the hem because I’m so short and I had to hack off almost 4″ on the sleeves because they were too long. I will have to redo the buttons because I bought 5/8″ buttons instead of 3/4″ and it makes a huge difference with the bound buttonholes.  I went to Joann’s to get the new buttons and because of their Independence Day sale I also walked away with a curved ruler that includes a French Curve and Hip curve plus instructions on how to alter patterns. The dress needed five bound buttonholes in the front and then it had a side zip too. To complete the outfit I wore a belt my grandmother gave me and my WW2 weekend hat with a navy sash tied around it. I love that hat, it is going to be my go to hat for everything I think. I have fabric to make this up again but with long sleeves and maybe it’ll get done before I go to England for a semester. 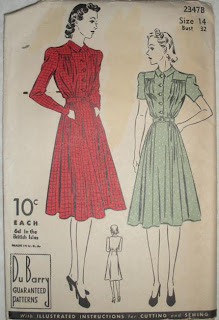 Fabric: I don’t know the specifics but it was from JoAnn’s and it’s 100% Cotton I think it was in the shirting section
Pattern: DuBarry 2347B
Year: 1939
Notions: Zipper and 5 Buttons
Hours: Four days of off and on sewing
First worn?: July 4th 2013
Wear again?: Yes
Make again?: Yes, but I’m going to make it with long sleeves and in purple flannel but I’m sure I’ll make it with short sleeves again it’s such an easy style to wear