In a never ending effort to work through my stack of fabric and projects, I whipped up this little number several weeks ago, allowing me to cross one more thing off my list. 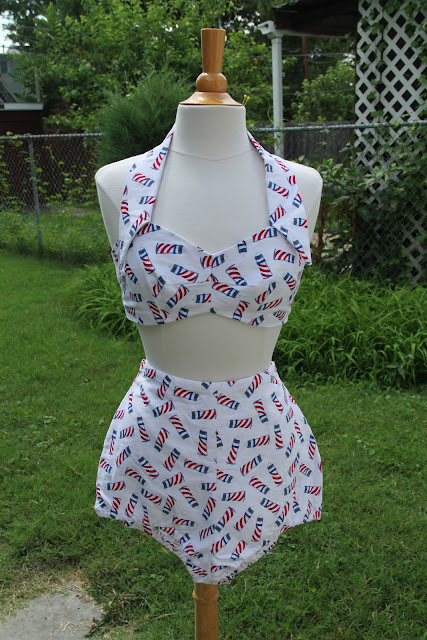 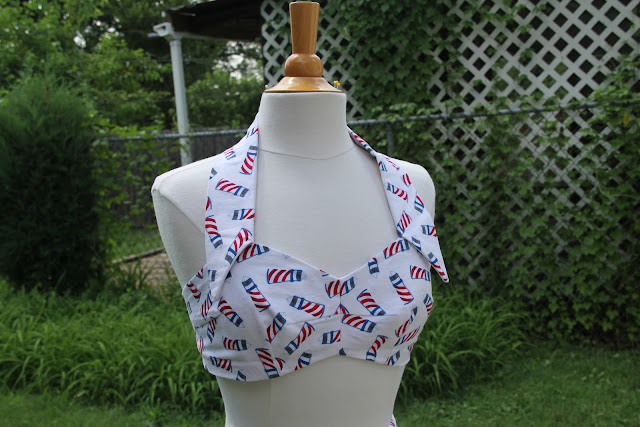 The top for this sunsuit is the 1950s Beach Bra Halter Top from Mrs. Depew Vintage. Here again, I didn’t bother to make a muslin first, but the fit is pretty good for the first time through. It’s definitely wearable. There are a couple of minor adjustments I would make if I were to make this again, which is a definite possibility since it’s a really cute top. First, I would shorten the halter strap just a hair. I think I would probably take about half an inch out just to give it a bit snugger fit and a tad more support up front. I would also want to adjust the darts some to accommodate a slightly larger cup size. I thought about putting sew-in bra cups in this one, but without having done a muslin first to adjust the fit properly it wasn’t going to happen neatly so I just skipped them. I used two large red buttons on the back closure, which are very cute, but I think it would also benefit in future from a little bit of narrow elastic around the bottom just to snug things up a little bit more. That would just be my personal preference, in order to make myself completely comfortable with not wearing a bra under it

My original plan was just to make the top to go with my sailor shorts that I made last summer. My mom picked the fabric up for me though, and when she discovered how much on sale it was she bought me an extra yard, which then became the trunks for the full sunsuit.

The pattern I used for the trunks is the same pattern I have used for all of my shorts. McCalls 7665 from 1949. I hadn’t used the trunks part of this pattern before, but as they were very similar to the shorts, I figured it would be pretty easy to whip them up. I adjusted the waistline a tad so they would sit up as high as I wanted them to, and took them in a bit in the sides as I have done repeatedly with the shorts pattern in order to get a closer fit. I also shortened them so they would be more bathing-suit length. They have a side zip and elastic in the legs. The waist did not turn out perfectly, as I faced it instead of using the waistband, but it is serviceable. I really just made this an an experiment and for photo purposes more than actual wear. The top was always intended to get more use. 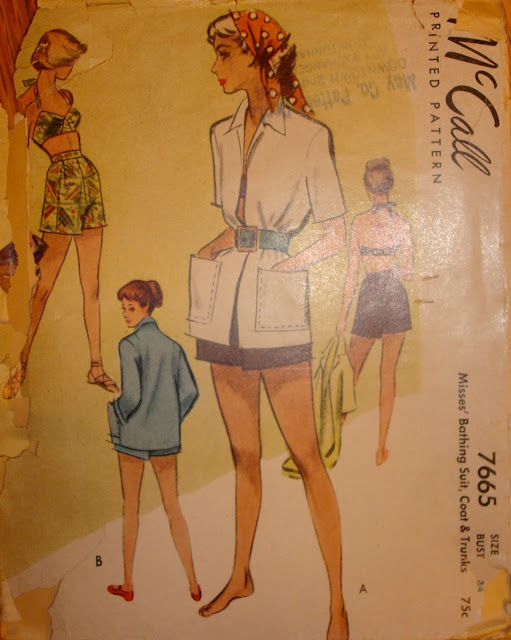 Now that I’ve got this project under my belt, and have seen a few other people’s attempts at vintage bathing suits, I am interested in maybe putting together a useable 1940s bikini at some point. I have to work through the piles of fabric I already have though before I can let myself start planning more projects.