September 19, 2011 LittleBlackCar
This latest sewing adventure actually started years ago with a piece of fabric that my father brought home to me from Indonesia: 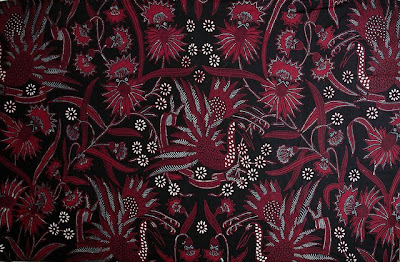 Obviously, this is the kind of thing that you don’t want to mess up because it’s not like you can run down to Hobby Lobby and get a couple more yards, right? I had to save it for the right pattern.

I finally settled on Simplicity 7885 (1977), which had a vaguely Asian-inspired wrap top and a plain A-line skirt that wouldn’t force me to cut the fabric up too much, obliterating the large-scale pattern. 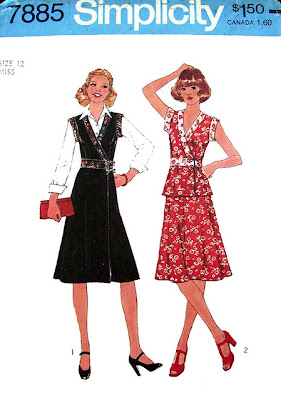 The results, I swear, are better than this squinting-into-the-sun picture suggest. I don’t know why my legs are foreshortened so much, either. 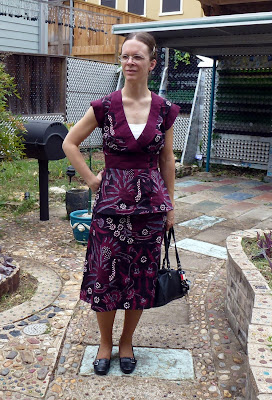 In the backyard of Houston’s Beer Can House, which seems to make an excellent alt-fashion photo-shoot location.

That top absolutely needs a camisole. I placed the buttons as prescribed and it’s still below the bra line. Granted, my taste in lingerie is very far from racy, but come on, people–this is day wear.

I almost destroyed the whole project in my efforts to improve on the skirt. I had to add side-seam pockets, of course, and I also decided to cut the front and back halves on the fold instead of piecing them in halves as the pattern required. If you do the math, you’ll realize that that means I eliminated all four skirt seams. Doh!

I won’t waste your time with it here, but I ended up fudging by topstitching the zipper in. You can see this bit of sewing abomination in the Flickr set. If my dad had come home a week later, I could have used Casey’s zipper tutorial and not made such a has job of it.