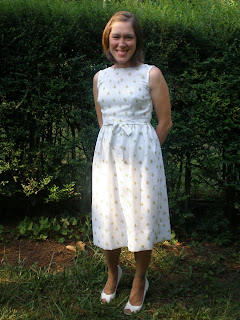 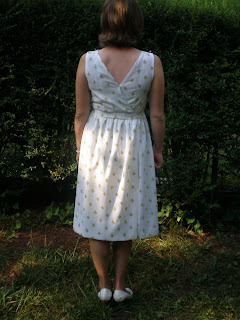 I recently finished a dress from Simplicity 3463 in a thrifted fabric (maybe challis? I am still not a good fabric detective). The pattern is “Simple to Make” circa early 1960s.

Adjustments: I made a size 16. I shortened the bodice by one inch and removed an inch at center front and center back at the neckline only, tapering to nothing at the waist.

Pattern Instructions: I did not follow them. I knew I would want to wear this dress with a pretty vintage slip, so instead of the facings, I used turned bias facings at the arms and neckline, as my fabric was a little sheer. I also did not use the pattern for the skirt pieces, which were just a few gathered rectangles. Instead I cut as large a rectangle as I could from my remaining fabric for the front and back of the skirt, and then divided the back into two rectangles. I did not have quite the amount of fabric called for, and I prefer a less full skirt, so I improvised. I gathered each of the rectangles and pinned them to the completed bodice to see how it looked. I ended up removing some fabric from the front skirt panel, as it seemed to full at first. Instead of finishing the overlapped edges at the back of the skirt, I simply cut them on the selvedge and pressed it under about an inch and a half.

Problems: The bias facing is a little stiff, and my fashion fabric puckers in a few spots where I slip stitched it, but it is generally nice in front. Also, I didn’t realize when I bought this pattern that the dress closed with hook and eye closures, I assumed it tied. Sewing the hooks and eyes in the proper places was a bit of a pain, and I ended up doing each at least twice. I also added a snap at the center back about half way up to eliminate gaping. Because of these issues, the back doesn’t lay perfectly, but it’s probably something you fellow seamstresses and seamsters [: )] will notice and most people I encounter while wearing it will not.

What I love about it: The fabric is nice for this dress ($1.50 thrift store find!) I like the depth of the hem on the skirt. I also like the fit. I read a post by Debi of Fashions from the Past where she said she often used patterns of one brand and from one era, so she knew what adjustments she would need to make without a muslin. Brilliant! I realized I sew mostly from early 60s Simplicity patterns, and can probably make similar adjustments when I do. So, I made no muslin, instead tissue fitting based on adjustments to a previously made dress. This is probably the best finish I have acheived on a dress as of yet, and I wouldn’t be embarassed at all to show someone the inside. I serged at the side seams and shoulders (where I didn’t use bias) and used a nice, soft hem lace. I tried to make by hemming stitches even, and I tried to sew the closures on neatly according to the Threads instructions (at least the first time anyway!)

What I would do differently next time: I’d like to make some similar dresses that are a little more casual- maybe in a knit fabric. I am really a casual sort of broad, so it would make sense for me to sew everyday garments, but I end up sewing pretty stuff that I don’t want to collect chicken eggs in, and I end up wearing jeans. I’d like to adjust the pattern to use the tie as a closure in place of the blasted hooks and eyes.

Well, as the title of this post would insinuate, I sewed this dress to wear out for my anniversary. I have posted more on that and the funny looks we got for being “all dressed up” over at my blog Farmhouse Garden. There are also a few more pics of my finished dress.

Thanks for all of the sewing inspiration! I love being a part of the Sew Retro community!