Gilbert Adrian was one of the most fantastic designers of the 1930’s and 1940’s, working as a costumer for MGM, and setting the trends for women’s fashions. With the making of the movie “Wizard of Oz”, he was said to have included a gingham dress somewhere in his line up every year.This first one was made from organza and taffeta. I decided to do a second in gingham fabric. It’s Sew Chic #1106.

Some things are different:I used a slot seam technique for the princess and center back seam. Click on the close up photo to see it better. I’ve never sewn an outfit with a slot before- come to think of it, I’ve never made an outfit that I felt could be improved by a technique like that. I like it quite a lot. I also did larger buttons (1″) and did only 3 of them. Is it better than the organza?? They just have different personalities.

This one does make me think of Adrian! 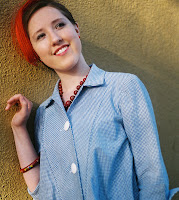