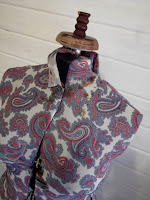 I was really grateful to be given this vintage “Adjustaform” dress form by J’s Grandmother. I really wanted a dress form for home sewing, but couldn’t really justify the expense right now, so this was well received! She tends to look after things, and this came to me in the original box, straight from the loft,where “she” had apparently been for many years.

When I removed her from the box however, it became apparent that she wasn’t in great shape. Her covers were torn and stained and the mechanics and panels were all wonky. Overall she was feeling pretty sorry for herself. J sheepishly admitted that when he and his brothers and cousins played in the loft as children, she had taken quite a battering!! “You’re not kidding” I thought! Poor old girl….

Luckily, she has a happy ending! You can read more on my blog
1 Comment