Last year, I was presented with a challenge: Make my then one-year-old niece a Foofa costume.  Foofa is a character from Nick Jr’s Yo Gabba Gabba: 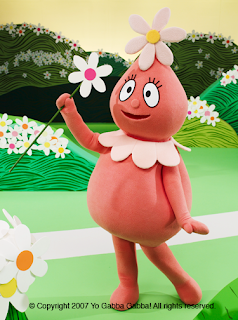 Pretty creepy if you ask me. I spent long hours studying the scary thing until I came up with what I thought was a workable plan.  I was going to take a RTW sweatshirt and a tshirt and transform it into something that could be stuffed.  It was a failed plan, though.  It simply didn’t work!  I was stumped.  No such pattern exists and I’m a sewist, not a seamstress.  While I can corrupt patterns for my own use, I haven’t the foggiest idea how to draft my own.  Then I stumbled across this pattern on ebay:

It’s vintage 70s.  But it did give me an epiphany.  The first thing I did was lengthen it.  It had to be lots longer so I could gather it to give stuffing space.  I also made the collar detachable and bigger and added pieces to the sides to cover the joins.  I made a shell to go underneath and attached the gathered bottom of the overdress to the bottom of the shell, and then sewed the necklines and plackets together after stuffing it.  I also lengthened the long sleeves and sewed the mittens into it. 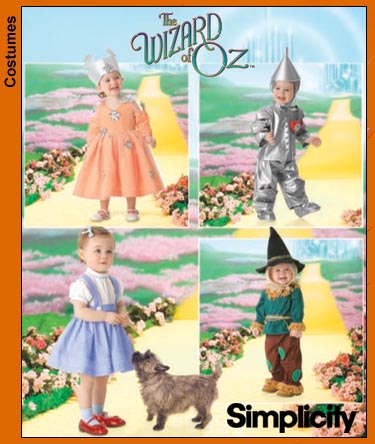 The pants, spats, and hood all came from a modern pattern.  I borrowed them from the tin man and redrafted the hood so that it was closer to the right shape and buttoned under the chin.  The head flower is from two layers of felt sandwiched with a layer of heavy-duty double sided interfacing, with a stuffed and gathered circle as the center of the flower.  I made the whole thing from craft felt, and that’s one of the few things I’d change if I did it again.  It was too warm for the baby and by the end of the night, her face had turned cherry red!  I’d also make the mittens removable–probably from a Raggedy Ann pattern.

Anyway, here’s a picture of Evie in the finished costume:

I actually entered it into the Simplicity Halloween costume contest last year and walked away with third place in my category, which netted me a sewing book that tells how to thread your machine.  Not useful to me, but it was free!  Honestly, I would’ve given up after the first idea didn’t pan out, but my brother taught the baby to give me pouty looks and say, “Foofa, pease, Laura!”  Who could resist that?  For more pictures, go here.