Who says the 70s can’t be timeless?

At least as far as school uniforms go… 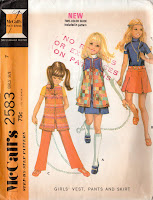 Using McCall’s 2583 from 1970, I crafted a new khaki pleated skirt for my oldest to wear with her uniform shirts.

The neat thing about this pattern is that it was still in factory folds! I copied it on tracing paper and didn’t bother with the pockets or the instructions. Who reads sewing instructions anyways?

The pattern says that size 7 fits a 24″ waist, but I think it’s more of a 24.5″ waist since that is my daughter’s size and it fits the body form at her measurements. We’ll see…

Here it is with one of her plain polo shirts. It doesn’t have the school crest sewn on because she wears it under her jumper (pinafore). She has other shirts with the crest on them. 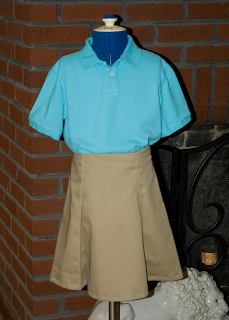 Next up is an identical skirt – just smaller – for her younger sister. The fabric is from Joann’s and is billed as “wrinklease”. I’m not sure exactly what they mean by that. Hopefully it means that they won’t be as wrinkly after washing/drying as their *other* uniform skirts/jumpers are. Because those? Wrinkle if you look at them the wrong way.

I made skirts last year but I was VERY unhappy with the way they came out. This model is MUCH nicer, I think.

Update! I finished the second skirt as well. It went together quicker than the first one. I’d say half the time? The difference was tweaking the method for the topstitching of the pleated areas and just being familiar with the pattern. I will DEFINITELY make this skirt again. Next time in black maybe, since the girls can wear either khaki, navy or black and they already have navy pleated skirts.