A Life in (Mail-Order) Patterns Some vintage patterns come in pristine factory folds. Some come carefully cut and refolded, with handwritten hints at their former owners’ tastes (such as: “very good skirt pattern for me” or “make in brown check”). And some come with a history. 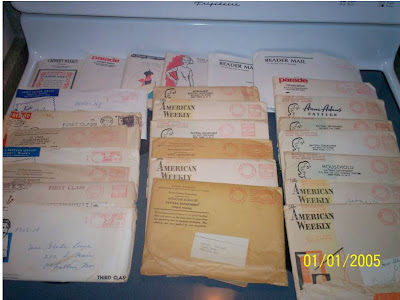 You will be getting all of these patterns. Each envelope has the pattern and pattern guide for cutting. I don’t know if all of the patterns are complete, but this lady seem to keep them all together but not guaranteed.

I tore the tape off the box barehanded when it arrived, crossing my fingers that a reasonable number of the patterns would be cute and within a few grades of my bust size (and they were, but we’ll get to that!) But as I gingerly opened each brittle mail-order envelope and photographed the contents, I felt as if I was traveling through time.

Most vintage lots I’ve acquired are random mixes of envelope patterns from the 40s to the 80s, with little clue as to who owned or used them. But thanks to the mailing address that appeared on every one of these pattern envelopes, I knew they were all ordered by one particular woman in Missouri as she sewed throughout her life.

The oldest patterns in her careful collection seemed to be from the late 40s or early 50s (most of the postmarks are undated, but I used this Cemetarian article for reference). For example, this gorgeous deep-V Marian Martin 9279 day dress with pocket detail: bust size 32, postage, 1 cent. The most recent ones are from 1990–I didn’t even know mail-order patterns were still available then! The last one is a multi-size pattern, but from her 80s purchases I gather Mrs. D was sewing a bust size 42 at this point. And the postage had gone up to 18 cents. Here’s what I learned about “this lady”:

Of course, there’s much more I don’t know about her, such as:

So there you have it! A life in mail order patterns! I’ve made a Flickr gallery so you can see the whole collection and I’ve been entering all the patterns into the Vintage Pattern Wiki (here’s one, for example). I’m keeping all the non-half-size shirtwaists, but as soon as I set up an Etsy shop I’ll be selling all the larger sizes, half sizes, and styles that don’t quite suit me, like this “Patt-o-Rama 8356” (too bulky in the bust area for me): Crossposted to my blog, of course!