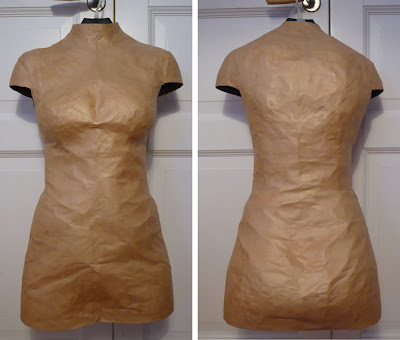 If you had followed my account on Burdastyle you would have seen a long search for a dress form that might work for me, through two different store-bought ones that didn’t fit so I returned them both. The smallest “normal” one was still too big around the chest and too long in the back, and the petite one that I could actually adjust to my measurements had the tinyest, most narrow shoulders I have ever seen. Not good enough since I want to use it to pin sleeves (and to drape of course!)… And they both had really rounded hips – mine are almost completely straight, though at an angle – and a convex lower back, mine is concave…  (yup, I’m a classic sway-back!).

I was then about to buy a Diana-doll, since they have the right overall shape for me, but they’re over 2000sek here (=about 200euro’s, or 300US$) and at second thought I think it’s a bit much when I can’t make them fit me properly… so I dedided to make one instead. It would end up a bit bigger than me, I figured, but it would still be more like me than the store-bought ones, and at a MUCH lower cost…

Another search began! To cut it short it ended in me finding out about dress-forms made from gummed paper-tape, that looked good enough to be worth the effort (I’m too much of a perfectionist!) and easy enough to make. Apparently they were used a lot before commercial dress-forms became fashionable (the oldest pictures and descriptions I’ve found of this type of dress-form are from the 1920’s). I like that!

Since I needed someone to wrap me and couldn’t really ask any of my equally busy friends to help me (it takes quite a while…) I had to wait until I went to visit my parents for christmas (that way my mum and I could make one each).

Then search no 3 began. To cut that short, in Sweden you can’t buy the gummed paper-tape I needed in office-,  hobby- or hardware-supply-stores like I had though, but you have to search in art-supply-stores. It was such a relief to find it in the last possible shop (I’m visiting a small town)! It was a bit more than expected (Sweden is an expensive country…), I had to pay 185sek a roll (=about 19 euro’s or 26 US$), not 5 US$ like I had read on the internet, but still, it’s not much.

I also bought us both cheap turtleneck-t-shirts with long sleeves (very tight ones) at the post-christmas sale (yey!), and made a simple tube-skirt to cover my bum (since I wanted a long form, to be able to fit skirts and dresses properly). My mum’s shirt was long enough in itself.

In my google-search for instructions, I found a couple of helpful sets, an old one at VintageSewing.info (my favourite, it’s from a 1920’s book and was very helpful), a newer one that was a great help too, another new one with some good hints and tips and another one, with good pictures, at Threads Magazine. I also found a quite interesting set of photo’s that demonstrate the difference between a store-bought dress-form and a custom made one, as well as how to mount the form on a stand (which I won’t do, I intend to use it hanging. I have a serious lack of floor-space). 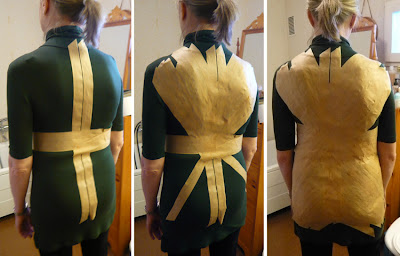 These pictures show how I started off wrapping my mum. For my dressform we wrapped the top part first and then moved on the the bottom half. I’m not sure which method worked better… 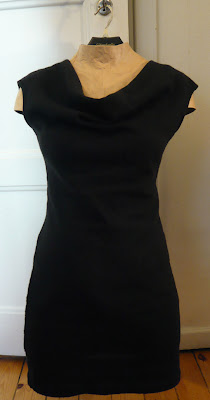 It’s not perfect, it doesn’t look just like me (I actually think it looks a bit better than me, hehe), but I think it will do the job quite well!

Now I’ve just got to make a cover for it! I plan to spray it with spray-glue before putting the cover on it, to avoid the cover from slipping around on the very smooth surface. And before doing that I might cover it in a layer or two of varnish to make it more resistant to humidity and water. But first I plan to use it to fit a few ill-fitting toiles that were to complicated to fit on myself (one is an asymmetrical 1930’s dress that turned out to be about two sizes too big)!

For more information on how to make it, check out my blog.