September 30, 2009 Archive from Blogger
I’ve named this dress the mad woman dress because I was mad to think I could finish it in time, let alone at all as it turns out! It also drove me a little mad because after four fitting muslins I still couldn’t get it right, and I’ve admitted defeat. This pattern is four inches too big for me so needed grading down, it’s missing pattern pieces and it comes with the scantest pattern instructions so it’s no wonder I failed. However, Anna encouraged me to post it anyway, so here is the pattern I planned to make, using a beautiful fuschia / deep purple wool crepe: 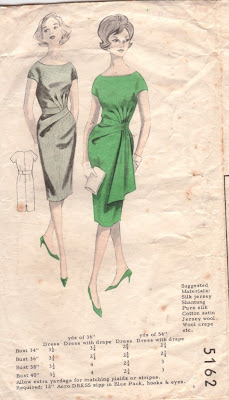 The pattern envelope bears no pattern company name or date, but I think it would suit the character of Joan Holloway quite well. My first muslin was made exactly to the pattern, and it came out beautifully but too big as expected, and after folding out the excess and cutting it apart to make a new paper pattern the next two muslins came out wonky, in that the bodice pulled awkwardly on the side that doesn’t have the tucks. The fourth and final muslin came out ok, except that it was too small! Here it is on my dressmaker’s dummy looking rather crinkled and forlorn (I had to rescue it from the waste bin for this photo): 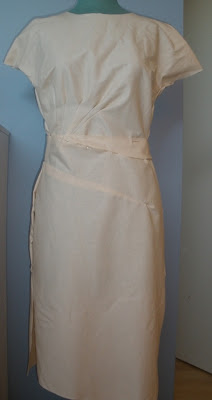 Anyway on to bigger and better things! Ah who am I kidding, on to easier things to get my sewing mojo back…..
More photos of the pattern pieces and instructions at my blog if you’re interested in the construction details.
7 Comments