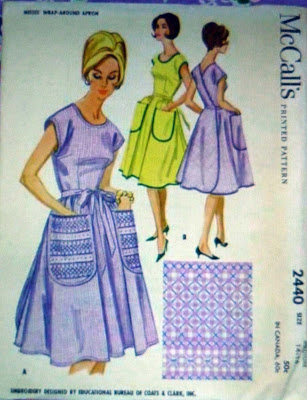 Okay, don’t laugh–this is one of my “modern” patterns.

I’m not kidding. Apart from a handful of genuinely modern patterns, that this is copyright 1961 makes it the most recent pattern I have. It was nicknamed “Polly Esther” because it’s made from–drum roll, please–a pink cotton-polyester bedsheet and cotton-polyester gingham trim. I normally use 100% cotton. I think I’ll stick with that policy from now on, too, since the cotton-poly was rather slippery and fussy to work with.

I really am unreasonably enamored of the pink-with-gingham-trim idea, though.

The appallingly-bad mirror shot below shows the results: 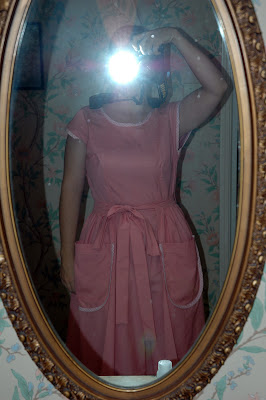 The shoulders are a bit big and I think I’ll probably trace the pattern piece and adjust them accordingly (bring the neckline in toward the center, mostly), but otherwise it seems to fit well. It think it will also fit better when I’m not wearing it over a bunchy tank-top.

I shrank the pockets up a bit since they were in the running for the biggest pockets I’d ever encountered; bigger, possibly, even than those on Simplicity 4015 (1952), which were pretty darned big. The smaller pockets–I only trimmed off 1/2 inch all the way around–are still as big as any I’ll ever need.

I was irritated, however, to discover that I didn’t need anywhere near as much bias binding as the pattern said I would. I spent a lot of time custom-making that pink gingham bias because nobody in my area carries it pre-made. I guess I’ll have to use the rest for something else.

Addendum: Now that I’ve worn it for a day, I think I will also be adding a button and loop on the back to help keep things from gapping. I love the idea of back-wrap dresses but they seem to be tricky to pull off in practice.