2 Tunics and a Shirt

These have been kicking about in my photo folder for a while now so it’s about time I posted them! I have a thing for 60’s and 70’s tunics and shirts and an awful lot of patterns for this type of garment in my stash so I decided to give some of them a go.

This first one is from this pattern 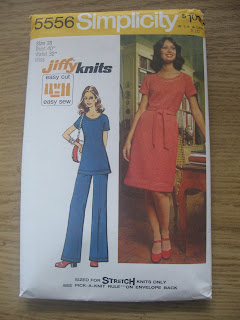 I’ve had this medium weight cotton knit in the stash for a while now and was looking for something that wouldn’t waste the yardage I had. The pattern calls for a zip up the back but I left that out as the neckline is wide enough that it’s not needed. I did use a centre seam up the back as it was a curved seam (why don’t modern patterns shape the back this way rather than always having us cut them on the fold?). I used a twin needle for the hems and neckline in a greenish thread that matches those colour squares. 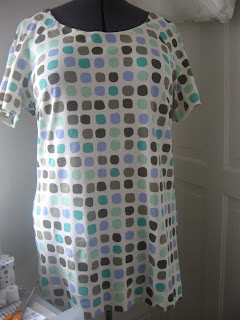 I’d never done darts on a knit before but I love the way it gives the garment more shape. I have worn this quite a bit already and it’s very comfortable. In fact I’ve worn it so much that I now need to mend one of the side seams where the stitching has given out on me!

The next one was from this pattern 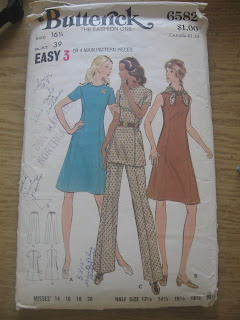 I haven’t had this fabric long, it’s a thickish lycra knit with bugs and flowers on it and I thought it had a retro feel so I decided on another tunic! I did put a zip in the back of this one but I used a 12″ rather than a 22″ as once it’s over my head the fabric will stretch the rest of the way down. It has princess seams and darts to shape the front and back. I’m really happy with the way this turned out but it came up a little tight for me. I’m trying to loose weight so it should hopefully fit me by the end of the summer but the knit is quite thick so it will be fine in winter too with a cardigan over it. 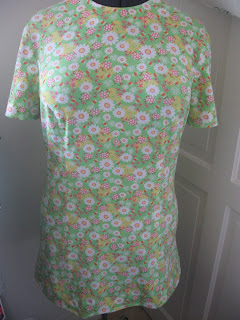 The final one is the best shirt I’ve ever made. I’m really happy with how it turned out despite having a little issue with the pattern. 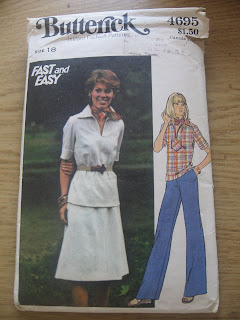 When I unfolded the sleeve piece it turned out that the lady who had sewn this previously had not only made adjustments to the pattern such as adding length and making some darts at the shoulder line which I had to unstick the tape from (the same lady owned the pattern for the second tunic I made and I had to undo her changes to that as well which was actually lovely, something I love about vintage patterns is the feel of history knowing that someone else has used them first!) but she had decided that she didn’t want the cuffs on the shirt so she’d cut that piece off and not put it back in the envelope! After a little bit of working out I added the length I wanted for the cuff when I cut out the sleeves and it seems to have turned out ok and looks like the pattern. Phew! 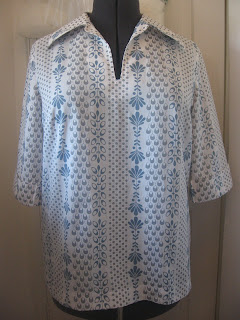 The thing I’m most proud of with this shirt though is the collar. I admit I can be a little bit slap-dash when I’m sewing and don’t often worry about pattern placement when I should be paying it more attention. I made sure the pattern of the fabric was centred on the shirt and then made sure that I centred the collar the same way which resulted in this 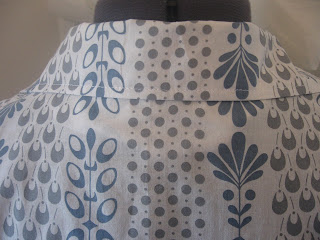 I keep looking at it and smiling that I finally did a great job with a collar!

I will use this shirt pattern again and again I’m sure as it’s such a simple shape but still interesting and it will look different with whatever prints I use for it (and would look nice in some plain colours too I’m sure). I may try it without the cuffs too at some point just to see what it looked like when the pattern’s original owner made it.

So, that is my vintage sewing from the last few months! I have 2 more things out that I’d like to get done for the summer so hopefully I will have more to show soon!