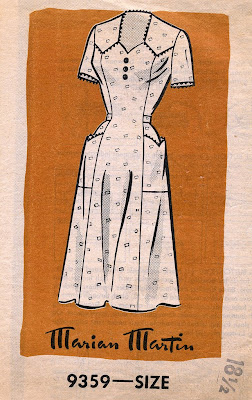 I’m new here. I’ve been lurking and reading for months and finally said to myself, “Hey, you sew–why don’t you actually join??” I’ve only been sewing a few years and, except for the basics show me by my mother, am largely trial-and-error self-taught. I particularly like 1920’s though 1940’s housedresses.

I’m working on a different dress right now, but the last two have been Marian Martin 9359, which is undated but probably dates from 1948-1951-ish. The pattern illustration is pictured above. 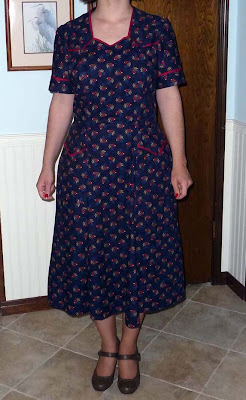 This is the first version. Pardon the decapitation–I was suffering from a particularly bad hair day and there was no reason to publicize it.

Oddly, the front shoulder yoke piece is too long along the inside [neck-side] edge. I expected it to be too long along the outside edge because I left out the shoulder pads (wore them in the Eighties and will never wear them again). However, the shoulders fit fine: It was the upper bodice that was too big. I solved this by folding a wedge in that pattern piece, taking up about an inch along the inside edge, then tracing and re-cutting it.

I made the second version of the dress using the new yoke piece and taking a little out of the center front panel (the pattern, according to body measurements, was a little big overall, but it only really mattered in the front bodice). Very simple, and the results fit beautifully, though I don’t have a picture yet of the second dress.

Anyway, I love the pattern and had to force myself to switch to a different one for the next dress so I don’t get stuck in a rut.