Drove my Chevy to the levy

I am the chevron champion of the universe! This is my newest project which I call my ’58 Chevy. Look at her sharp lines down the back and her styley fins (erm, collar). 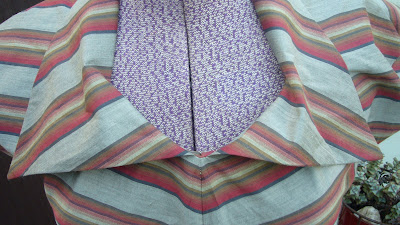 She comes from this Weigel’s pattern. Weigel’s was a Melbourne pattern company based in Lennox St, Richmond (not too far from where I live!) 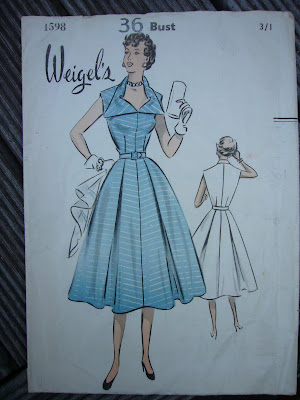 So. She’s not finished, and this is why.

The good bits – that collar is ace. I did a killer job matching the chevrons. And I love, love, love the inverted darts in the skirt which are a super classy way to add volume without adding waist bulk. For these reasons I’ll definitely make her in the future (with alterations, though I doubt I’ll ever find such spiffy fabric for $2 a metre again).

The bad bits – well, the biggest issue is that she doesn’t have underarm darts so she’s unable to accomodate much of a bustage. But I couldn’t think how to chuck darts in without ruining the chevrons. Ideas?

Another issue is that the collar is faced with a bias strip. Despite understitching, the darn thing is rolling outwards. Any cheaty sneaky methods you canny sewers can suggest other than laborious, shaped facing/lining?

Finally, the angle of the chevrons. I reckon the angle should be more acute – looks good in back, but the front looks a bit flat. I also reckon her skirt should have the chevrons pointing upwards for that sassy wasp-waist visual illusion. I followed the grain lines of the pattern exactly (except for the collar, because they LIED and claimed you could cut it on the fold. That’s impossible. You can see in the back view that I cut it in two mirror-image pieces.)

[Incidentally, does anyone else HATE blogger’s photo loading setup? Most vexacious.]