The Good, the Bad, and the Extremely Unfortunate

It’s been far too long since I last shared, and I have no good excuse. I have at least a half dozen things I’ve finished, so I’ll parse them out in a few posts over the next couple of weeks, and 4 more things that just need finishing.

First, the Bad (modeled by my homely, homemade assistant, whose freakish figure makes it look even worse): 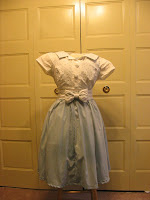 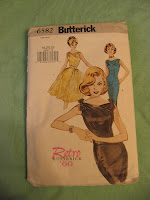 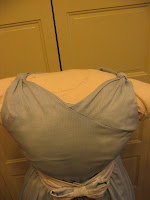 This dress (Butterick 6582) fought me the whole time. It’s one of those I look at and only see the flaws. The bodice was too droopy, so I had to shorten the straps, which I then mangled, so I covered the seams with a faux-bow tie thing. This covered the flaws, but the ties are now very thick and the arm holes are tight. The front seam is (very obviously in the photo) wonky–it’s both crooked and puckered. The pleats…it’s a blessing the belt hides where they meet the bodice.

The jacket is actually a bodice from a different pattern, Simplicity 3829, and not all that bad, except for my attempt at homemade covered buttons. They’re not terrible, but the technique needs a little work. 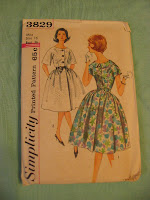 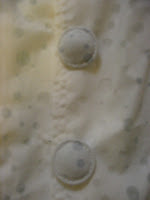 The Good is the belt, Vogue 9648 (the bottom view on the patten envelope). I’m quite pleased with it, and have worn it with other things. The size is way too small but it was a breeze to resize, and it went together fairly easily. The one trick was finding a good weight canvas to use as interfacing. I left off the “tail” of the bow and cut the bow a tad bit bigger to make it look more dressy. 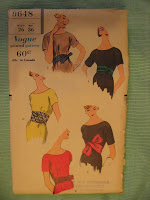 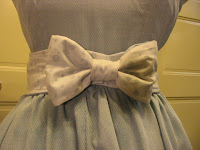 And the Etremely Unfortunate? The petticoat. I’m not even going to show you that one. I made it up as I went, sans pattern, and, well, it does the job, but the less said about it the better.