Saga of woe. A dress disaster. 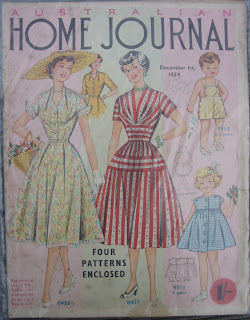 Today’s saga begins with this 1954 Australian Home Journal pattern I borrowed from Moggy’s formidable collection of all things ancient and patterny. The jaunty red striped version caught my eye and I thusly invested in metreage of a vaguely striped thing to replicate it. I don’t know what I was thinking because I really don’t like the fabric I bought. First obstacle.
So I made a muslin, which looked nothing like the pic above, so I redrafted the bodice. Twice. That neat little straight line under the model’s bust? That, no matter how much adjusting and resewing I did, does not lie straight. It did an ugly upturned U-shape that was most unimpressive. So I abandoned plan A and launched into the other version pictured because I could use some of the bits I had already cut.

I felt like such a Mildred in this but it did teach me something – set-in sleeves, on me, are most frump-making. I pulled the darts in to sassify, I played with different sleeve lengths but ick, it just sucked. Like I’d just been been removed from a polygamous compound in the desert.

So it festered in the Pile Of Shame for months.

Then I picked up this wee pattern: 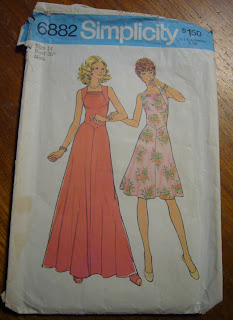 I’m really getting into the 70s patterns at the moment. Some of them are just so simple and sassy.

But my ill-luck continued. I cut out a piece, then accidentally cut another piece out of it. Ooops. Then had to do some wily patching up (see bodice below). Sewed bits on backwards. Tore another piece. Ran out of purple thread. More patching. I swear, this was the most acursed sewing saga ever. I blame the fabric.

Anyhoo, here’s the nearly-done result. Those pockets are just pinned on because frankly, I still think the fabric is a world of BLAH, and am tempted not to invest another moment on the thing. I’m giving the frock one last chance at redemption if the good burghers of Sew Retro think it’s worth it. But be harsh. If you think it’s a dud, lemme know and I’ll chuck every scrap of this purple stripe into a bag and donate to some quilty type. Or burn it. And start over with something I actually like.