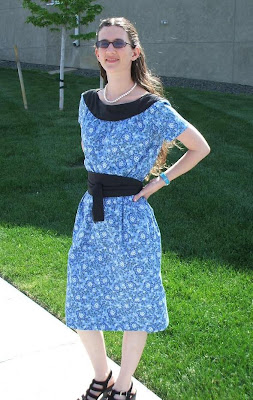 This pattern is very similar to a dress I’ve seen modern versions of produced by the Big 3 and Kwik Sew. In choosing the fabric (which is sort of a Hawaiian bandanna print) I was trying to make it look more modern than obviously vintage.

I didn’t really make many changes from the pattern, shortening it 3.5″, and leaving out the interfacing that they wanted put in the skirt from the waistline to the bottom of the hips, presumably to make a more solid poof at the hips, making the fabric stand out from the body, which seemed like a bad idea to me.

The belt is from a different pattern, one from the 1970’s, which I modified a bit, making the front section narrower. In my opinion, the belt makes the dress. It looks a lot plainer and more homely without it. 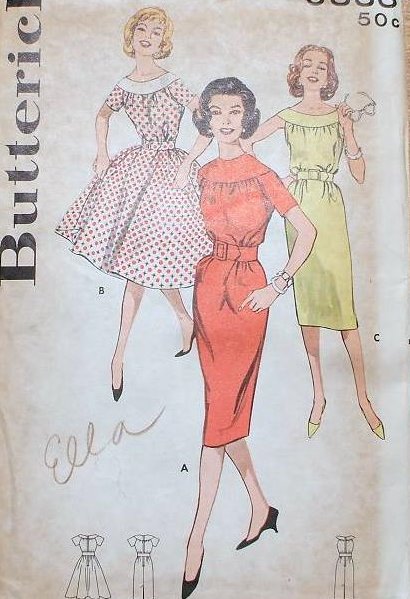 I like the kick pleat in the back instead of a slit. It’s makes it easy to walk, doesn’t hobble me, and I’ve never felt that slits are very elegant. I feel awkward with part of my legs sticking out some of the time and not others.

Another pic and more details (not so much construction details as personal idiosyncrasies) are here on my blog.