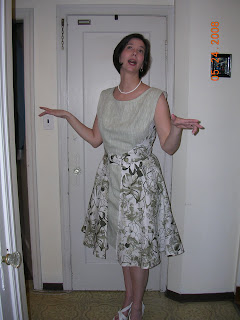 And my interpretation of the pose on the pattern envelope! It’s Butterick B4790 Retro 1952!
For so few pattern pieces this pattern gave me a little grief. Mostly brought about by my lifelong friend, Stupido.
I picked up this lovely sage green linen and then a corresponding green printed linen for this. I cut this and sewed most of it on Wednesday. I made the bias tape from leftover fabric pieces and then it started to go sideways. I decided that I didn’t want to bias tape to be visible and contrasting to the fabric. So instead of encasing the seam with binding as the pattern requires I decided to apply the bias tape as the facings. I trimmed the seam and under stitched the bias tape then I sewed the tape along the inside of the dress edges. I was quite happy with it until after handling the dress a few times I noticed a small fray at the neck edge. I smacked my hand to my forehead and cursed the loose weave of linen! What was I to do? I emailed my internet sewing buddy Bonnie and asked for some advice. She is such a support and sage sewer! Her suggestion was to remove the bias tape and then apply a thin strip of interfacing at the edges of the garment that would be bias taped. Did I mention I understitched the seam? In the end I cut off the bias tape. Losing about 1/2 inch of fabric around the edges. I then did as advised and applied a thin strip of interfacing along the neck edge. I then finished the seam with the bias tape as I had originally intended. It worked! No seams fraying apart!
Then there was a small problem of the fit. I don’t know why I think I am smaller than I actually am but there you go. I cut a 12 and did not allow or make any alterations to accommodate my 16 waist and my 18 hips. Hips didn’t really matter in this but the waist did! Shockingly it was too small! I used a ribbon tie to close the under dress at the back. Then I made a fabric rectangle the same width as the back bodice where it wraps around the front. 4 snaps and I was good to go!
Almost. I was very good and let the dress hang for 24 hours to let the bias work itself out. I cut the hem and when I set it on the dress form again it was a sad, sad, sad state of a hem! Wavy and wonky as all get out. So I got down on the floor and marked the hem again from the shortest length on the skirt. Making the dress a few inches shorter than I had originally intended. Still below the knee though! Perfect! I love it!
I started this on May 21st, 2008 and completed it May 24th, 2008.
Sorry about the long entry! I’m glad I could share my experience!