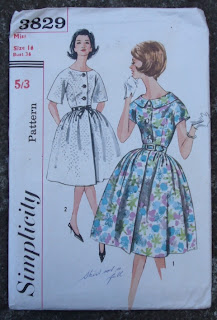 I went to Fryerstown Antique Fair on the weekend (near Castlemaine, in Victoria, Australia) and gots me a pattern.

From the pattern I made me a frock. Fabric is from Spotlight, and since I didn’t buy enough (grrr), I cut the collar and hem from an old pair of linen trousers that had a hole courtesy of my bike. The buttons are old vegetable ivory. I like it. I feel like I’m wearing a giant version (sans lace, ribbon, and pinkness) that I might have been dressed in for my 4th birthday party. Which is quite fitting since my seamster mother made me some quite fabulous clothes when I was a wee thing.

I also picked up this cool little skirt marking device that places a line of chalk – poof! – as you squeeze the rubber bulb and spin around in front of it. So ingenious. 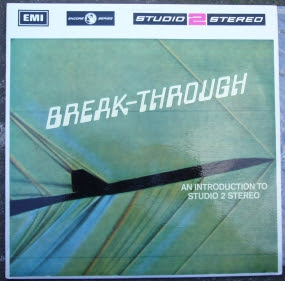 Incidentally, following on from my early question about what’s a good soundtrack for sewing retro, I thought I’d post what I was listening to as I finished this one up. It’s one of my very favourite genres of bad LP – the stereo demonstration album. The sort of thing you’d put on to show off your speakers when you’d finally ditched your mono system. Ooooh, listen… strings in the left speaker! Cymbals in the right! Courtesy of muzak-ed pop songs! So good.

OH! And I meant to say. This pattern nearly killed me. I like to think of myself as reasonably competent with the sewing and the dressmaking. But. A combination of the most awkward and clunky English in the instructions and an unprinted pattern riddled with perforations, only some of which actually corresponded to points that required marking and matching, meant that I made countless mistakes and actually cut the skirt out upside down. Too bad, I told the pattern, it’s going on upside down and no one will know.

Except if I post it on the internet. Ooops.