August 9, 2007 livebird
Before I show you la frock, I would like to send a special, personal, heartfelt thanks to the genius creator of the twin, collaborative splendour that is a) the blind hem stitch and b) the blind hem foot. Never again will I hand-sew a hem. Circle skirts, you no longer intimidate me. Bring on the metres and metres of hemline because I SHALL CONQUER THEE!
Anyway. I bring you the Frock Lobster.

This is the Butterick 1960 reissue, Retro #6582. Some of the gals on Pattern Review slammed it so I was a little wary, but she came together a treat. I got some terrific advice from you Sew Retro folks about how to adjust darts when you lengthen the bodice… which I ignored, accidentally, because I went ahead and sewed them before I had read your comments. More fool me. But somehow, it worked. Next time I’ll do it properly though and I thank you all – what a great community this is.

A couple of comments. One of the Pattern Review complaints was that there was a whole lot of fussing to create a drapey crossover neckline that didn’t justify the not-very-drapey results. I decided to structure it with three carefully placed pleats at the shoulder instead of the rather haphazard gather in the instructions. See below – I think you’ll agree it worked rather nicely. 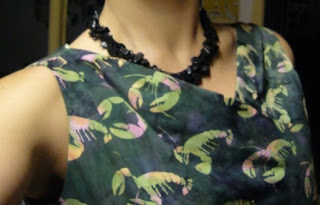 Secondly, isn’t attempting the impossibly unnatural pose of the models in the pattern illustration half the fun of photographing the finished item? The classic stance – pelvis thrust forward, shoulders rolled in a coy fashion, arms all angular and hips twisted – cracks me up. This particular illustration has a vixen propped up on what seems to be an invisible bar, waiting for her martini. I couldn’t do that one without falling over.

I want to recruit an army of femmes in killer wasp-waisted frocks like this one to hit some really trendy part of town en masse where The Cool People are decked out in shapeless smocks. We’ll show ’em how silly they look. Yes, in a dress covered with lobsters, making THEM look silly. Hmmmm.